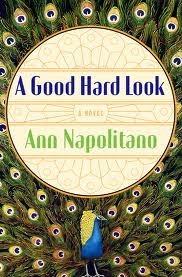 “The truth does not change according to our ability to stomach it.” ~Flannery O’Connor

So begins this gorgeous novel that through the interior lives of vibrant and memorable characters shows how we might live our lives to the fullest.

There are three sections: Good, Hard, Look. And, with those simple and declarative monosyllabics, Napolitano neatly parses the experiences of Cookie Himmel, Melvin Whiteson, Lona Waters, Miss Mary Treadle and Flannery O’Connor through 1963-64 in NYC and Milledgeville, Georgia.

The narrative opens on a hot summer’s evening as “the peacocks tilted their heads back and bellowed and hollered their desires into the night… They didn’t care that there was a wedding tomorrow, or that the groom who had just arrived from New York City, was lying beneath a lace canopy at his in-laws’ house, paralyzed with fear.” And, while the rest of Milledgeville startled awake, the peacocks (like their spirited, uncompromising owner) “were out to do what they liked, when they liked.”

Southern writer Flannery O’Connor (“Good Country People,” Wise Blood, The Violent Bear It Away) is both muse and character and the pulse at the centre of the narrative. She is connected to Cookie through their shared past, to Miss Mary as a neighbour, to Lona as a client and to Melvin as a friend on equal footing, unabashed about offering candid truths. It is her address delivered as an honoured guest at Cookie’s high school graduation that gives the novel its title and both the characters and the reader the challenge: “Take a good hard look at who you are and what you have, and then use it.” Sage advice for all time, don't you think?

Diagnosed at 25 with lupus, Flannery is now 37 and focused on her writing as she tries to keep her constant pain and attending exhaustion at bay. One of the many aspects that I love about this book is how Napolitano so convincingly inhabits O’Connor and offers insight into her writing process: “Flannery gripped the pen in her lap like a baseball she wanted to throw. The two main characters in her novel…stood in the centre of her mind. One was made of flesh and blood, the other was two-dimensional…Rayber, wouldn’t come alive and no matter how hard Flannery pounded the letters on her typewriter, she couldn’t make him so.”

After Melvin reads “Good Country People,” he asks Flannery, “ I wondered what it says about you, that there are no happy endings…All of your characters are left in some kind of pain.” Her response is brilliant: “Maybe I left them on their way to a happy ending…I’m sure you didn’t consider this, but it’s possible that the characters are closer to grace at the end of the stories. Grace changes a person, you know. And change is painful.” Later, when he reads Wise Blood, Melvin thinks, “each sentence felt like a balled-up fist, intent on knocking him out.” Flannery “trapped tiny disappointments, tiny hopes, tiny frustrations, and pinned them down with sentences.” Flannery, herself, knows how to be patient with a scene, “waiting for the violence to start.” She discovered that “she had to go a little mad herself, in order to get the story right, in order to pin him down like a butterfly.” And, in the heart of this tumult, she was tempted to push away from her desk: “a life was coming to a brutal end beneath her chattering fingertips and she wanted to be anywhere but where she was. She wanted to be anyone but who she was.” That total disappearance of self that Flannery strives for in her writing, all of the other characters yearn for as they make meaning of their lives.

The tragedy that closes the first section and transitions to “Hard” cleaves all of the main players, and even though you may see it coming, it is no less awful when it happens. It is through the aftermath of that event that the surviving characters puzzle out not only what it means to live their lives as fully as possible but also how that might happen now that “all has changed, changed utterly,” to reference Yeats.

There’s much I have not revealed about this book, because I want to be mindful of letting Napolitano’s accomplished storytelling wash over you, when you find yourself in her richly evoked world-- a world where the peacocks mirror the uncompromising spirit of their mistress, Flannery O’Connor, and, in the end rise up, feathers spreading, “sea green, inky sapphire, specks of yellow…shimmering.”

Ann Napolitano's literary star is rising. Get yourself a copy of the luminous A GOOD HARD LOOK and prepare to be startled.
Posted by Janet at 12:35 PM

I loved this one too. The passages about O'Connor's writing process are fascinating. I learned so much about her life that I never knew.