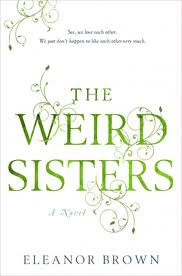 Even before I began thumbing through the pages of this sparkling debut novel, I knew I would be smitten, having made the assumption that Brown would rely on the Bard's plots, characters and memorable lines since she references MACBETH'S witches in her title. And, for those of you who know me, all references to Shakespeare, whose prose rides the beat of my anxious heart, make my Litnerd heart swell. Though I do not pretend to have any prophetic powers like those weird sisters in the Scottish play, I do know what it feels like to fail, over and over again, just as our protagonists Rose, Bean and Cordy do as they navigate their way to belonging.

When your father is a professor of Shakespeare at a local college, and you and your sisters are named for female characters in birth order (Rosalind aka Rose 1st born from AS YOU LIKE IT; Bianca aka Bean 2nd born from THE TAMING OF THE SHREW; Cordelia aka Cordy 3rd born from KING LEAR), it is not terribly surprising that he tells you of your mother's cancer through a page copied from The Riverside Shakespeare: "Come, let us go; and pray to all the gods/For our beloved mother in her pains." Or that your oldest sister announces her intent to marry by quoting lines from ROMEO AND JULIET.

What matters, however, is that you all flock home. And, that your not-so-weird secrets of self-worth, theft, and pregnancy will be aired in good time.

There are worlds in Eleanor Brown's words and each of them entranced me.
Posted by Janet at 4:05 PM 1 comment: 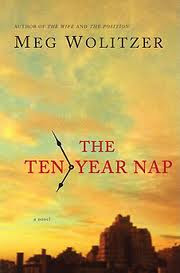 I tumbled headlong into Meg Wolitzer's keen-eyed universe with her most recent satiric novel THE UNCOUPLING and am determined to thumb my way leisurely through her backlist, beginning here with THE TEN-YEAR NAP.

For the group of women friends who gather at Golden Horn to catch up on their lives over a leisurely breakfast, the past decade has been rather a blur of wifely duty and stay-at-home-motherhood, not the future they had been told would be so different from the one their own mothers embraced.

Like Richard Ford or Philip Roth before her, Wolitzer creates characters who breathe, argue and occasionally apologize for their all-too-human fallibility. I am hooked on her lived-in fictional folk who make me believe every word.
Posted by Janet at 10:54 AM No comments:

WHY NOT? FIFTEEN REASONS TO LIVE by Ray Robertson (2011) Biblioasis, 177 pages 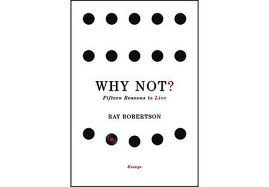 This collection of personal essays was short-listed for the Hilary Weston Writer's Trust of Canada Prize for Nonfiction in 2011.

I've long been a fan of Robertson's clean, visceral prose in his novels MOODY FOOD, GENTLY DOWN THE STREAM and WHAT HAPPENED LATER (a brilliant dual narrative featuring a fictional seventeen-year-old Ray discovering Jack Kerouac and a middle aged Kerouac making the journey to his Quebec roots in the novel he always intended to pen after ON THE ROAD).

In WHY NOT? Robertson lays himself bare, revealing a longtime struggle with OCD and depression by creating a rosary of essays based on issues that matter and motivate him to not only choose but embrace life. Each piece is a worry bead with philosophic grace notes that touched me deeply. From "Work" to "Art" to "Humour" to "Friendship" to "Solitude" to "Duty" to "Death," Robertson held me in his thrall, with prose so direct and resonant that I found myself needing to scribble down his phrasing to return to later.

I especially enjoyed Robertson's munificent reference to poetry throughout the collection, including perfectly placed gems by Baudelaire, William Blake, Raymond Carver, Emily Dickinson, Philip Larkin, John Updike, W.B. Yeats and this tanka contemplating love by an unknown Japanese poet: "If from your mouth/there hung a hundred-year old tongue/and you would babble/I still would not cease to care/but indeed my love would grow."

The essay that broke me was "Friendship" and the unexpected (though I ought to have expected it) encomium to the canine companions that have shared Ray's life. Like him I have known how it feels to "work side by side for hours without the slightest sense of self-consciousness or unease," and to have one so "unfailingly affirmative, enthusiastic, and energetic" to stand by me. Anyone who doesn't consider the unquestioned love from a dog, the devotion faithfully until his/her end, lacks not only "an understanding of canines, but of friendship. It's not the number of legs that makes a friend."

Take your time with these essays. Your emotional life will be all the richer for it.
Posted by Janet at 7:00 PM 2 comments: 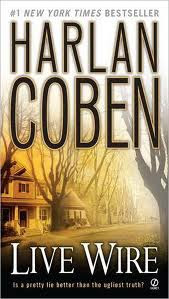 Chatting with my colleague this morning who introduced me to Myron Bolitar a year ago has me all fired up again about the thriller I read on a recent trip to NYC, a perfect place, in fact, to be immersed in the landscape of a Coben novel. I had just strolled along Central Park West to enter the park across from The Dakota, where not only Yoko Ono shared her life with John Lennon, but also where Bolitar's best friend Windsor Horne Lockwood has a tony pied a terre in which Bolitar flops on nights he's too tired to make the commute home to New Jersey.

In addition to the moral satisfaction of witnessing the bad guys and dolls be suitably punished by tale's end, what especially keeps me hooked to Coben's books are his fully formed eccentric characters and the popular culture references that make me feel like one of the cool kids, albeit one who came of age with showtunes and bad '80s hair.

In LIVE WIRE, Bolitar's clients--former tennis star Suzze T and her rock star husband Lex--receive an anonymous Facebook post questioning the paternity of their unborn child and Lex disappears. In his search for Lex, Myron also unexpectedly finds his long-estranged sister-in-law Kitty who seems tied to a nefarious underworld that she is unable to escape. Supporting Myron on his quest to set things right are his best friend Win, his business partner (and former wrestler) Esperanza and their dutiful office assistant, Big Cyndi, whose predilection for outrageous makeup lands "somewhere between nineties goth and seventies KISS."

"The ugliest truth, a friend once told Myron, is better than the prettiest of lies." That aphorism and opening gambit is the moral crucible that Myron faces over and over again in LIVE WIRE as he puzzles out the ugly truths he is forced to face about his clients, his family and himself.

If you haven't yet found your way to Harlan Coben's smart, sassy, and satisfying thrillers, well, what are you waiting for?
Posted by Janet at 6:59 PM No comments: 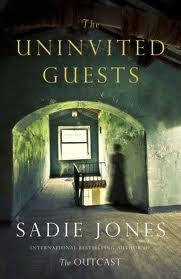 Consider this forthcoming novel from Sadie Jones a delectable hybrid of DOWNTON ABBEY meets SUPER 8 set in provincial England in the early years of the 20th Century at Sterne, a dilapidated manor house owned by Charlotte Torrington by way of her dead husband Horace. Charlotte has three children, Emerald, Clovis and Smudge, all of whom are emotionally attached to the place, especially now that their mother has remarried the doting, one-armed Edward Shift, and their paternal legacy is seemingly up for grabs.

On the occasion of Emerald's birthday, a terrible train wreck nearby propels an undesirable group of strangers to Sterne for temporary succor and with outrageous consequences as the household is thrown into complete disarray. Add to the uninvited guests a shady figure from Charlotte's past, Charlie Traversham-Beechers, determined to join in Emerald's birthday revels, who turns everything topsy turvy with his insane and irresistible challenges and there is an evening that no one will soon forget.

Although THE UNINVITED GUESTS begins like a traditional 19th Century novel, the journey Jones takes you on is anything but conventional. Be prepared to be surprised at each plot twist and to enjoy the ride just as much as Smudge's beloved pony Lady.
Posted by Janet at 8:32 PM No comments:

ALL MY FRIENDS ARE SUPERHEROES by Andrew Kaufman (2011) Coach House Books, 106 pages 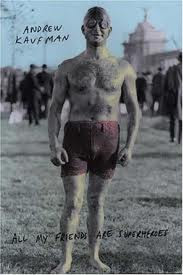 Kaufman's satiric romp is like THE INCREDIBLES for sardonic grownups.

Protagonist Tom is the only one of his friends who is not a superhero. He even married one: the Perfectionist, whom he affectionately calls, "Perf." Problem is that on their wedding day her previous paramour Hypno (who had, during their courtship, hypnotized her into believing "that sex with him would be the best of her life") out of spite or jealousy hypnotized the Perfectionist again insuring that her new husband would be invisible in her eyes.

The trick works and the novel opens with the Perfectionist onboard a flight from Toronto to Vancouver, six months after her nuptials, believing Tom has left her, when, really, he is sitting in the seat beside. Tom has the duration of the flight to convince "Perf" that he exists. Can he do it?

Pick up ALL MY FRIENDS ARE SUPERHEROES and find out.
Posted by Janet at 8:30 PM No comments: