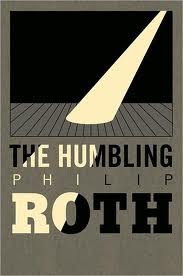 I'll read anything by Roth, but this most recent novella had me a little disappointed in the predictability of the three act outcome.

Roth continues to be preoccupied with sex and aging and here his protagonist, a formerly famous actor who recently admitted himself to a psychiatric hospital, finds himself smitten with a lesbian 25 years his junior whom he first met in utero when he played against her mother in Synge's Playboy of the Western World 40 years ago.

Pegeen Mike lands on Simon's doorstep and offers him sexual salvation and companionship, but of course that can't last what with her parents and her scorned lesbian lover interfering.

Yet, I can't help but admire the directness and honesty and the believability of the words that Roth puts in the dirty mouths of his characters.
Posted by Janet at 9:44 AM No comments:

THE BRUTAL TELLING by Louise Penny (2009) 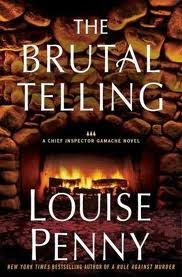 It's the end of summer in Three Pines and good things are happening for some of the locals: Ruth has adopted a duck named Rosa who follows her around like a lost lamb; the Bistro is brimming with business over the Labour Day weekend as visitors stretch out the last long weekend; and Clara Morrow has an upcoming show of her paintings at the Fortin Gallery in Montreal, a vernissage that promises to provide connections to some of the most influential people in the art world including a curator from the MoMA in NYC.

Even though the old Hadley House has been sold and gutted to become a posh inn and spa, it has been tainted again, by the corpse of a stranger and by the living breathing presence of a man who is a stranger to his son, but a "saint" to the wider world.

When "the Hermit's" bludgeoned body shows up on the floor of Olivier's Bistro, Inspector Gamache and his crew from the Surete are called in from Montreal to reveal not only the killer but also some ugly truths about greed.

In addition to purposeful plot twists and being welcomed into the homes and hearts of Three Pines locals like the Morrows, Myrna, Ruth, Olivier and Gabri, the inclusion of a subplot involving a first edition of Jane Eyre, the china of Catherine the Great and the work of Emily Carr kept me flipping pages through the night so I gulped the book in one sitting from start to finish.

The Brutal Telling is Globe and Mail crime fiction editor Margaret Canon's favorite pick for 2009 and I can see why. Pass the word about Louise Penny. She deserves to be read widely and with enthusiasm.
Posted by Janet at 9:11 AM No comments: 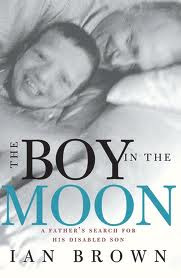 I probably read close to 100 books/year, many memoirs, mysteries and novels and no book has moved me more than this one this past year. I put Ian Brown's memoir on my Grade 11 English reading list because of the connection to L'Arche ( a community established by Jean Vanier for adults with intellectual disabilities) where all of my students are spending an evening volunteering throughout this school year.

What is astonishing about this book is the honesty, directness, compassion and love that infuses it. Brown does not set himself up for a pity party as a parent of a profoundly disabled son. Instead, he has the humility and grace to write truthfully about the exhausting and infuriating challenges of raising a child who not only rages and self-abuses but also has the capacity for joy.

Your attitudes will be altered by The Boy in the Moon and your heart might just be opened to a radical way of thinking about disability.
Posted by Janet at 4:45 PM 1 comment:

THE ART OF RACING IN THE RAIN by Garth Stein

This is a book I wish I'd written. I'm always a sucker for a story that's told by a dog (shouts out to Virginia Woolf, David Wrobelewski and Erika Ritter for particularly memorable canine tales) and in this case, Enzo is especially engaging.

On the last day of his life Enzo recalls the recent upset and troubles that have befallen his alpha male Denny, a young widower who has had to fight for custody of his only daughter because his rich in-laws refuse to accept that he could ever provide for Zoe in a sufficiently materialistic way.

Enzo and Denny are as close as man and man's best friend can be. They bond over Zoe, Eve and car racing. Yes, car racing-the art of the racing in the rain that is the title.

From the outset you know that Eve is going to die and it can't possibly be a surprise when it happens, but Enzo's description from his canine perspective underscores how transformative death can be.

Treat yourself and read this book that you will wish could just possibly be true.
Posted by Janet at 9:52 PM No comments:

This novel about a brain cancer patient's final summer is deft and not self-pitying. It's written from a third person perspective, so you have a little emotional distance from the three main characters, a self-absorbed university-aged daughter (Abby) and her parents (Elliott and Helen).

Clearly Chenoweth has walked this grief walk in her own life, because many of the details smack of a reality that is not contrived and essentially believable.

Sparing the reader the final goodbye, Chenoweth wisely closes the book with Helen (in the final stages of her inoperable brain cancer--a fate her healthy lifestyle couldn't spare her) looking over her shoulder as her husband and daughter jog up the path to meet her.
Posted by Janet at 11:29 AM No comments:

Although a novel, this could easily have been a morality play. You find infidelity, murder, betrayal and lust on the side streets of sleepy Stratford, the provincial Ontario town that discovered its raison d'etre when Tyrone Guthrie launched the theatre festival in the 1950s. And, in the tradition of 16th century morality plays, no one remains unpunished: avarice and lust eventually take a backseat to more pressing situations that involve real grief.

If you're lured by peering into the private lives of theatre folk, this is the book for you. Findley weaves a tapestry of small town preoccupations and peoples the warp with characters those familiar to his other work will identify: the lonely, the dispossessed, the sexually confused.

The tale unfolds and all of the digging begins after an accidental spade severs the line of communication into the home of the festival's nascent and dishy actor Griffin Kincaid.
Posted by Janet at 6:39 PM No comments: 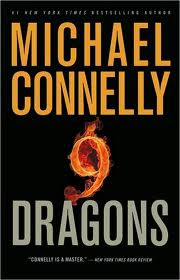 I picked up Connelly's most recent novel at IFOA where I heard him read on a night that Ian Rankin hosted. Both are masters of the crime fiction genre.

In 9 DRAGONS, Detective Harry Bosch is sent to investigate a homicide at Fortune Liquors, a small shop in a seedy section of south L.A. There he discovers John Li has been shot to death at close range, three times in the chest. Having met Li several years before, Bosch feels a connection and vows to his family that he will find his killer.

As he closes in on a suspect, a triad gang member who had been collecting protection payments from Li, Bosch receives an upsetting text video from his daughter's phone. Madeleine lives in Hong Kong with her mother and it appears that she has been abducted and Harry is being threatened from afar to drop his case in L.A.

Over the next 72 hours, Harry is on the chase of his life to find his daughter before she is trafficked out of Hong Kong and her organs are sold on the black market. Before they are reunited, Harry and his ex-wife's new love (and former triad member) Sun Yee find themselves in the seediest districts in Kowloon where there is real danger at every turn. There are 9 corpses that accumulate--the 9 dragons of the title.

Fans of Connelly will be amused by the appearance of Mickey Haller as Bosch's defense attorney when the Hong Kong police follow Bosch back to L.A. and try to pin the slaughter on him.

9 DRAGONS zooms along at a breakneck pace. I read its 374 pages in one gulp.
Posted by Janet at 9:43 PM No comments:

THE GIRL WITH THE DRAGON TATTOO by Stieg Larsson

I have been meaning to read this crime novel since I first learned about it in the Sunday New York Times over a year ago. However, no amount of crime novels exposing man's inhumanity to man that I've read in the past could have prepared me for the horrific details connected to the masochistic serial killer at the heart of this story.

Thankfully Larsson tempered such graphic descriptions with a subplot involving a difficult romance, the tenuous health of a frail business icon and a through line about the mysterious disappearance/possible murder of a beloved woman who is part of a rich and famous family with questionable relationships.

Translated from the Swedish, I did find proper names with unfamiliar accents distracting, but not so much as to persuade me to stop reading this fiery-footed tale that gallops apace. And, the only situation that I found not credible was the remarkably open sexual rapport that journalist Mikael Blomkvist has with his married best friend Erika Berger.

Don't take only my word for this compelling book. Listen to Michael Ondaatje who blurbed "The Girl with the Dragon Tattoo is an utterly fresh political and journalistic thriller that is also intimate and moral."
Posted by Janet at 6:57 PM No comments: