Detective Dave Robichaux finds his past isn't completely past when his murdered friend Dallas Klein's daughter Trish, a suspected grifter, shows up in town counting cards at blackjack tables and then involves herself with his longtime buddy and P.I. Clete Purcell who has a weakness for damaged women.

At Dave's day job he is put on the case of a young woman who has apparently committed suicide after being raped repeatedly at a frat house. Investigating that case leads him back to an unsolved murder of Crustacean Man, an unidentified homeless wino who had died as a result of a hit and run that Dave traces back to the Lujan family who also seem to be implicated in the death of Cesaire Darbonne's daughter.

Throughout the investigation tempers flair and Dave finds himself pounding his fist into the face of the sleazy D.A. in defense of his lesbian boss, the unflappable Helen Soileau. When his own family is threatened, Dave seeks vigilante justice with full time thug Lefty Raguzza. Although Dave behaves with his own moral code, you can forgive him just as his wife Molly does (she's a former Roman Catholic nun) because he is almost always right.

James Lee Burke writes convincing characters with true human frailty and scripts a plot at breakneck speed. I'll be reading as many of his books as I can find.
Posted by Janet at 7:24 PM No comments:

THE NEW YORKERS by Cathleen Shine

In a neighborhood peopled with lonely, hardworking folks, you meet Polly and her brother George and their puppy Howdy who came with the apartment, Jody and her aging pitbull Beatrice, gay restauranteur Jamie and his cairn terriers and divorce Everett who is suffering from empty nest syndrome now that his daughter is away at university. Each character's life bleeds into each other's and they each find love and meaning in unexpected ways.
Posted by Janet at 7:19 PM No comments:

THAT SUMMER IN PARIS by Morley Callaghan

Take a trip back to the halcyon ex-pat days in Paris of 1929 with Morley and his wife Loretta as they insinuate themselves into the lives of the Fitzgeralds ( yes, F. Scott and Zelda) and the Hemingways as each of those men build their writerly careers. Don't bat an eyelash when the abstract painter Miro carries Ernest's bag of boxing gear and acts as timekeeper in one of his friendly matches with Morley, or even turn your head when James Joyce invites them to stop by while he plays a recording of the suffragist Aimee Semple Macpherson.

The tenderness with which Callaghan recounts those luminescent days will encourage you to savour each beautifully wrought anecdote and will have you reaching for the novels each of those men were writing at that time: TENDER IS THE NIGHT; A FAREWELL TO ARMS and IT'S NEVER OVER.
Posted by Janet at 8:41 PM No comments:

The Star Wars parody cover of Fisher's memoir had me reaching for a copy. In addition to being a pop cultural icon as Princess Leia (having been replicated as a PEZ dispenser, a barbie doll, a shampoo bottle...) Fisher is also a celebrated novelist and screenwriter.

In WISHFUL DRINKING she begins at the beginning--being born into a celebrity family of famous parents: America's sweethearts of the 1950s, tap dancing, Singin' in the Rain Debbie Reynolds and crooner Eddie Fisher. That is until her father left her mother when Carrie was two to "console Elizabeth Taylor with his penis." She is this direct. Always.

By the final page, you'll feel you've become Fisher's confidante as she's spilled her personal beans about being an addict (no surprise because of the publicity her drug and alcohol addictions have drawn over 30 years) who was once counseled by Cary Grant as a favour to her mother; about her insecurity regarding her looks when George Lucas told her to lose ten pounds (and she only weighed 105) and to support her breasts with Gaffer tape since they didn't wear underwear in outer space, duh; about her powerful ability to turn men gay. Just ask the father of her only child who left her for a man.

Her daughter Billie, by the way (who was recently at a Paris debutante ball with Bruce Willis's daughter Rumer) has decided to abandon a dream of becoming a neurosurgeon who specializes in schizophrenia, in favour of becoming a comic of which her mother heartily approves:" If you want to be a comic, you have to be a writer. But don't worry, you have tons of material. Your mother is a manic depressive drug addict, your father is gay, your grandmother tap-dances, and your grandfather shot speed." And you will laugh and laugh and laugh just like Billie.
Posted by Janet at 8:26 PM No comments:

ALL THE COLOURS OF DARKNESS by Peter Robinson

What appears to be a cut and dry case of murder/suicide where a local theatre designer has apparently hanged himself after having bludgeoned his partner to death, turns out to be something much more that threatens the well being of Detective Alan Banks and DI Annie Cabbot as they try to peel back the layers of truth.

When Banks meets one of the dead men's mothers, she reveals to him that her son was a spy. In his work day world secrets and deceit were the norm and murder the Machiavellian solution. In the M16 realm of kill or be killed "the end almost always justified the means." The closer Banks and Cabbot get to revealing other truths about the players, the closer they come to their own mortality.

Robinson's ability to create tension and to build suspense lasts through to the final pages. And, he has me reaching for a copy of OTHELLO, to re-familiarize myself with its web of deceit and darkness that give this 18th Banks mystery its title.
Posted by Janet at 4:35 PM No comments: 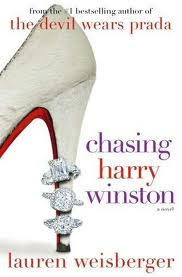 From the novelist of the bestselling blockbuster THE DEVIL WEARS PRADA, CHASING HARRY WINSTON follows the vapid lives of three late-twenty-something New Yorkers who have it all: looks, loves, avocations. Having it all isn't enough so the three best girl-pals decide to make a pact to alter their already enviable lives. Emmy (just dumped by her long time boyfriend) resolves to embark upon meaningless safesex with strangers on all continents, but Antarctica; Leigh, a rising junior editor on the NY publishing circuit takes on the enfant terrible of the literary world, Jesse Chapman, at his request and muddles her rapport with her gorgeous and successful fiance in the process; and Adriana, the drop dead gorgeous daughter of a supermodel who spends most of her days luring men and being, well, drop-dead gorgeous, decides it's time to settle down with a suitable boy and establish a suitable career.

Complete escapist New York fantasy, this chick-lit selection kept my crankiness at bay while I was suffering my way through an interminable superbug and coughing myself awake every hour for the past three days.
Posted by Janet at 4:28 PM No comments: