I'm a fan of Blunt's John Cardinal mysteries like BY THE TIME YOU READ THIS, FORTY WORDS FOR SORROW and BLACKFLY SEASON, so was keen to pick up his new book, in which he takes a break from the gripping suspense that defines the series.

In NO SUCH CREATURE we follow a gregarious thief named Max and his great-nephew, Owen, as they travel across the American southwest in search of robbery jobs where they fancy themselves modern day Robin Hoods, stealing only from the wealthy Republicans in their wake. Max is a washed up actor with a flair for accents and disguises who loves to quote Shakespeare even as he's getting his short-term hostages to add their Rolexes, diamonds and emeralds to his goody bag. Owen, is his orphaned nephew, who dreams of enrolling at Juilliard in NYC and training to be a real actor.

Out of deference to a fellow thief nicknamed the Pontiff whom he met at "Oxford" (Max's euphemism for incarceration), Max looks out for John Paul's daughter Sabrina on his way through Las Vegas. She ends up joining Max and Owen for a while, and just as they feel comfortable trusting her with their secrets, she takes advantage of them and splits to pursue her own American Dream.

There is a sweetness to the telling that is new to Blunt's books, with the grace, compassion and emotion I already expect when I pick up one of his novels. Reading NO SUCH CREATURE is a heartening way to pass the time, keeping company with Max and Owen, in spite of their flaws.
Posted by Janet at 8:19 AM No comments: 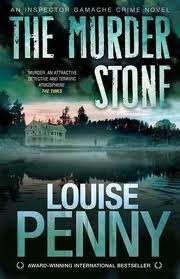 At a charming boutique hotel called the Manoir Bellechasse, in the Eastern townships of Quebec, Armand and Reine-Marie Gamache are intending to celebrate their wedding anniversary in quiet contentment, returning to the place where they first became intimate.

The Finney family, established and moneyed Montrealers, also gathers to pay tribute to their father by having a figurative sculpture in his likeness unveiled in the back garden. In the heat of summer, in the height of blackfly season, the irascible middle-aged siblings barely behave in an effort to suck up to their aged P, demanding mother. A storm brews, tempers flare and one of the siblings is murdered, leaving those remaining suspicious of each other and their intents.

As Penny was editing this fourth novel, she decided to use the name of a former student of mine, one who got me on to her books in the first place. It is delicious to find him among these pages as one of the suspects and I can't wait for him to see his name in print.
Posted by Janet at 7:50 PM No comments:

THE FLYING TROUTMANS by MIriam Toews (2008)

Hattie Troutman gets called back from hanging out with her boyfriend in Paris to run interference for her mentally ill sister Min. Min's kids Logan and Thebes have ministered to her invalid needs, but she refuses to get out of bed and face the world and her responsibility as a parent. Hattie and Logan manage to get Min to hospital where her needs will be assessed.

Min beckons Hattie to her beside and asks her to help her die. Hattie refuses. It is obviously a decision she's had to make before. Hattie takes Logan and Thebes on a roadtrip to the midwest to try to find their father who Min kicked out of the house when the children (now 15 and 11) were small.

Nobody writes about teenaged angst more convincingly or sympathetically than Miriam Toews. This novel will claw its way to the top of bestseller lists.
Posted by Janet at 11:58 AM No comments:

THE CORPSE WILL KEEP: A DANA LEONI MYSTERY by Pat Capponi

Parkdale P.I. Dana Leoni and her unlikely crew of boarding house sleuths have their first paying gig. Harp, a university friend from Dana's past, thinks his wealthy Rosedale mother is being taken advantage of in her efforts to help the homeless at the local Out of the Cold program where she has volunteered for years, because that is just what one does. Harp turns to Dana because he trusts her and because he knows that she knows only too well how to navigate her way undetected through the rough life on the streets.

When a strangely handsome and charismatic do-gooder at one of the church shelters takes an interest in Dana, her judgment is temporarily impaired and she finds herself face to face with fear and real danger. Through Dana, Pat Capponi writes convincingly about Toronto's marginalized and makes a terrific argument for compassion without a note of pity.
Posted by Janet at 6:50 PM No comments:

THE P'TOWN MURDERS: A BRADLEY FAIRFAX MYSTERY by Jeffrey Round

If you are at all intrigued or bemused by camp and gay culture and like to read mysteries, this confection is the escapist read for you. Bradley Fairfax works for a topsecret agency where he is only known as "Red" and where his boss, whom he has never met, is the mysterious "Grace." Fairfax is going to Provincetown, a gay mecca on the eastern seaboard, where he is claiming his former lover's body. Ross died accidentally, and Brad is pretty certain that his death was also intended.

While in P-town, Brad discovers there is more to the gay-friendly town than meets the eye. Big Ruby, a lesbian who runs a high end coffee shop, Cinder, a transvestite who becomes Marilyn, Renee and Cybil with a brush of lipliner, and Zach, a natural healer with indigo locks and a washboard stomach, all form distractions for Brad as he attempts to remain undercover.

Round follows the prescription for a conventional murder mystery, but enhances the experience by pulling back the curtain to see the wizard operating the strings.
Posted by Janet at 10:19 AM No comments: