FRIEND OF THE DEVIL by Peter Robinson (2007)

I've been a fan of Robinson's Detective Banks since I picked up GALLOW'S VIEW, one of his earliest novels, probably 15 years ago. In FRIEND OF THE DEVIL, there are two murders of young women--both grisly. The first, a 30-something quadruplegic, has had her throat slit and left to bleed to death slumped in her wheelchair on the beach, and the second, a university student is raped, gagged and strangled moments after she parts from her drunk friends after a night out on the tiles.

Robinson complicates the first case by revealing that the victim was a serial killer herself, in a case that seems all too eerily akin to Karla Homolka and Paul Bernardo, especially when you remember that Homolka was known for "making a deal with the devil" in her efforts for leniency in her sentence while her husband received life in prison for the murders of Kristen French and Leslie Mahaffy, two of the high school girls they tortured and murdered. While Banks and Annie Cabbot are investigating the separate cases, a third is murdered, but this time it's an officer, and more specifically a member of their own team who was apparently lurking in his off hours to try to catch the repeat offender.

FRIEND OF THE DEVIL moves to a thrilling conclusion. If you haven't read Robinson before, this would be a good place to start.
Posted by Janet at 9:06 PM No comments:

THE GUARDIAN by Nicholas Sparks

Sparks is the same guy who wrote THE NOTEBOOK that was adapted for the screen and made into the heart-rending captial R-romantic vehicle starring Ryan Reynolds and Rachel McAdams--not to mention James Garner. THE GUARDIAN is another novel about love lost and found.

What interested me about this book, in addition to having an almost human Great Dane, was the way that Sparks torqued the typical romance into a thriller that had me flipping pages to be sure the sociopath received his comeuppance at the end.

If you're looking for a quick, undemanding, yet entertaining read, this book should leap to the top of your list.
Posted by Janet at 9:26 PM No comments:

PARIS: VARIOUS TITLES including PARIS TO THE MOON; THE FLANEUR; PARIS, FRANCE: PERSONAL RECOLLECTIONS and A MOVEABLE FEAST 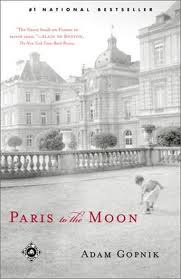 I spent the March Break in Paris and found myself reaching for books about that fair city from the bookshelves at Shakespeare and Company, in the Latin Quarter, facing the Seine.


PARIS TO THE MOON (2005) is New Yorker writer Adam Gopnick's personal essays about living with his wife Martha and their young son Luke in Paris in the 1990s. They are eclectic and charming, both the essays and the people and you learn quickly what matters to a five-year-old--evidently swimming at the Ritz where there are mermaid mosaics he can dive down and kiss is one thing.

THE FLANEUR: A STROLL THROUGH THE PARADOXES OF PARIS (2001) by Edmund White has a distinctly gay perspective of life in Paris in the 70s and 80s. I learned invaluable expressions like "poules de luxe" (high class hookers) and "le non dit" (the great unsaid) from White as well as an appreciation for flirting and how it is an essential part of everyone's day, gay or straight. White is a gossipper and I learned that Collette apparently asked her dentist to replace all of her teeth with jade, and that Josephine Baker claimed "the rear end exists. I see no reason to be ashamed of it. It's true there are some rear ends that are so stupid, so pretentious, so insignificant that they're good only for sitting on." I didn't know that Harlem Renaissance poet Langston Hughes worked as a dishwasher in Montmartre where he wrote a poem about Baker and sold it to VANITY FAIR.

PARIS, FRANCE, Gertrude Stein's personal recollections about her life at the centre of an exclusive coterie of artists in the 1920s was the most difficult of these books to read because her style is choppy and affected. An amusing anecdote involves Picasso who encouraged her to purchase a completely different dog from her black standard poodle who died because he claimed it wouldn't be fair to the new dog. Her French friends had another opinion along the lines of "le roi est mort; vive le roi." She followed the French and bought another poodle and gave him exactly the same name.

Hemingway's memoir A MOVEABLE FEAST which records episodes from 1921-1926 was published posthumously in the 60s. It is an interesting balance to Stein's book since it involves the same characters including Fitzgerald and Joyce at the same time. Hemingway's prose is terse and strong and clean. I discovered that he and Fitzgerald and Pound curried funds together from their wealthy friends to raise enough money to spring Thomas Eliot from his life of drudgery in the bank in London--the great TS Eliot who became the modern poet to define a generation with "The Waste Land" and "The Love Song of J. Alfred Prufrock" What impressed me most about Hemingway was his self discipline. He "always worked until [he] had something done and [he] always stopped when [he] knew what was going to happen next."
Posted by Janet at 9:04 PM No comments:

I picked up a copy at the airport on my way to France and found myself immersed in the two Toronto worlds created so convincingly by Redhill, whose previous novel MARTIN SLOAN I admired. I was intrigued by the opening epigraph borrowed from Borges that "the man who commits suicide remains in the world of dreams"--a generous and romantic notion, perhaps a comfort to families who are the survivors of suicide.

In one storyline, Jem Hallam is an apothecary from the UK come to set up a business in 1856 Toronto with the notion of bringing his young family across when he's established. Circumstances find him befriending an unusual photographer and one of his models. The three of them become family to each other in the absence of their relatives.

In the contemporary narrative set in 1996, David Hallis has recently completed suicide, unable to continue to live his increasingly dependent and dwindling life due to Lou Gehrig's disease. While he is yet able to walk, albeit unsteadily, he arranges with his daughter's boyfriend to be dropped off at the Toronto Island Ferry at the foot of Yonge Street--his journey across the Styx where he leaps to his death in Lake Ontario.

Redhill adeptly shifts from one narrative to the next moving between Toronto's past and present evoking love, memory and grief all the while.

CONSOLATION won this year's City of Toronto Book Award.
Posted by Janet at 8:55 PM No comments:

I'm only beginning to read graphic novels (like PERSEPOLIS and MAUS), but I picked up SHORTCOMINGS while I was at the Beaches library branch and sat down to browse and ended up reading it from cover to cover in about an hour.

The simple black and white drawings are striking and Tomine's ability to develop character in such a limited space is impressive. If all graphic novels are as smart and insightful as this one, I could get hooked.
Posted by Janet at 8:52 PM No comments: