THE CASE OF LENA S. by David Bergen

This heartbreaking coming-of-age novel follows Mason Crowe, a 16-year-old who dreams of becoming a poet, along a vulnerable path to love. At the beginning Mason has a crush on Seeta, a beautiful East Indian girl a couple of years his senior who has been betrothed to a man she's never met. Seeta soon rejects Mason's attention for his older brother Danny's and Mason finds himself intrigued by Lena Schellendal, an impulsive and provocative girl who opens up a world of intimacy to him he hasn't previously experienced. Lena is a troubled soul, unable to be saved, especially by those who love her.

Bergen writes convincingly of teenaged love/lust and matter-of-factly creates authentic sex scenes. If you are at all prudish about burgeoning sexuality and its discovery, you won't be able to read the first 150 pages without blushing.
Posted by Janet at 6:30 PM No comments: 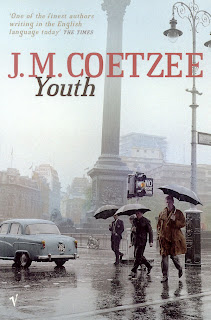 One of my students loaned me his copy of YOUTH because he thought I would enjoy the narrative and the literary references to Eliot, Pound, Beckett and Ford.

18-year-old John, the narrator, is disgruntled especially about living in apartheid South Africa in the 1950s, so he moves to London to begin his life as a poet. He is equally disappointed there when he secures a job as a computer programmer with IBM, a vocation that totally depresses him.

In this coming-of-age novel, this young man's struggle to find his way in the world Coetzee writes with tenderness and clarity.
Posted by Janet at 7:28 AM No comments:

THE FORGERY OF VENUS by Michael Gruber

I love the way Gruber paces his novels and engages me culturally. In THE FORGERY OF VENUS, painter Chaz Wilmot makes his living producing parodies for ads and magazine covers and squeezes by financially to support his ex-wife and children. His talent is, however, of another time when portrait painters such as Rubens, Titian, Rembrandt and Velasquez created canvases that read like photographs.

Wilmot gets two breaks: one financial where he agrees to participate in a drug study led by a former university peer who is interested in its effect on creativity, and one creative where an art dealer arranges a commission for him to restore a fresco in a Venetian palazzo.

During the drug trials Wilmot experiences hallucinations where he becomes younger versions of himself as well as time travels and becomes the esteemed Spanish 17th century painter Diego Velasquez, the finest portraitist of his time.

Back in the present in NYC Wilmot suffers a mental breakdown and then finds himself able to create a portrait of Venus, in a style that is indistinguishable from the work of the original master. This forgery stands to make Wilmot a very rich man who will finally be able to provide the exclusive private health care his son Milo needs to survive his childhood.
Posted by Janet at 6:27 PM No comments: