REMEMBERING THE BONES by Frances Itani (2007)

Georgie Witley is invited to share her 80th birthday with 98 others in the commonwealth also born on April 21, 1926--HM Queen Elizabeth II's birthday. She is driving herself to the airport when her car careens off the road and tumbles into a ravine. There, tossed onto the sloping woods, Georgie considers the arc of her life, which in its contemplation leads her to think about her role as mother, wife, widow, daughter.

REMEMBERING THE BONES is an extraordinary tale about an ordinary woman. I was suprised by its narrative drive.
Posted by Janet at 10:30 AM No comments: 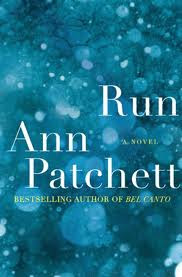 After an evening of hearing Jesse Jackson speak at Harvard, former Boston Mayor Doyle and his two adopted sons Tip and Teddy find themselves stuck in a snowstorm unable to find a cab. Tip is a dreamer and is distracted with thoughts of cataloguing fish back in his lab when he is hit by an SUV, but not before he is pushed out of the way from being run over by a stranger, also making her way home with her 11 year old daughter.

The 24 hours that follow are harrowing for the family as new bonds are formed with the young black girl, Kenya, and her mother Tennessee, who is hospitalized and awaiting surgery for her internal life-threatening injuries. Kenya has known about Tip and Teddy and has followed their public lives in a way that is marginally creepy.

Patchett weaves the voices together with grace and beauty and explores the differences in opportunity available to those who are rich/poor, black/white in contemporary Boston. In the Harvard residence there's a sign promoting Obama 2012, a curious and forward thinking pop-cultural marker.
Posted by Janet at 12:26 PM No comments:

ASHES TO BONES by Kathy Reichs

Forensic pathologist Temperance Brennan's new cases involve the decomposing remains of several adolescent girls. One of them presents clues that remind her of an Acadian girl from her childhood who had for all intents and purposes disappeared.

She met Evangeline and her little sister Obeline while they were staying with their aunt and uncle during the summers in South Carolina. Tempe and Evangeline bonded through storytelling, poetry and their joint obsession with Anne of Green Gables.

Typically fast-paced, with more forensic detail than usual, ASHES TO BONES is a gripping crime novel that is also educational. If you have a squeamish stomach, you might want to give this book a pass.
Posted by Janet at 9:55 AM No comments:

A FOOL IN PARADISE by Doris McCarthy

Painter Doris McCarthy's memoir of her childhood and early professional years is enchanting. I knew she'd been educated at OCAD by Lismer, one of the Group of Seven painters, but I had no idea that she taught in a vibrant art programme throughout the war years at Central Tech, in the heart of Toronto.

McCarthy's voice is intimate and honest. She continues to paint well into her 99th year.
Posted by Janet at 9:52 AM No comments: