WHAT HAPPENED LATER by Ray Robertson (2007)

There are two narrative threads in this gripping novel. In one, the adolescent Ray Robertson explores what it was like growing up in Chatham in the 70s and 80s, keenly aware of the limitations that social status imposed in his hardworking community wherein he dreams of following the intellectual footsteps of his idol Jim Morrison and Jim's idol Jack Kerouac. Even more convincing, however, is the novelist's reimagining of the iconic Beatnik's journey to small town Quebec to trace his Kerouac roots on the roadtrip that would hopefully lead to his sequel to ON THE ROAD that he had planned to call WHAT HAPPENED LATER.

Robertson's novel did two things for me: helped me reclaim some of the pop cultural elements of my own adolescence growing up in small town Ontario and pushed me to read Kerouac again. As a grownup.
Posted by Janet at 5:25 PM No comments:

Set in the mid 19th century in the American northwest on a polygamous Mormon farm, EFFIGY is a haunting story of the fourth wife to Erastus Hammer, a cruel horse-breaker who married Eudora/Dorrie for her peculiar talent as a taxidermist. It sounds loopy, but most of the narrative is heartbreaking as each of the lesser wives tries to placate the first wife who seems to run everyone as if they are part of a boot camp ordered by God.

York's prose is strong and visceral and entirely convincing. EFFIGY is longlisted for this year's Giller Prize for the best book of fiction in English published in Canada.
Posted by Janet at 1:57 PM No comments:

THE ARCHITECTS ARE HERE by Michael Winter (2007)

I've been a fan of Winter's minimalist and filmic style since I first read his short story collection ONE LAST GOOD LOOK several years ago. I appreciate the way he blends fact/fiction so much so that every thought each character has in his stories has the ring of truth.

THE ARCHITECTS ARE HERE is a roadtrip of sorts with two childhood friends Gabriel English and David Twombley who are making their way back to Newfoundland from Toronto in a reconditioned former LAPD car to assuage their broken hearts and to discover the awful truth of what has happened to David's father, Arthur--a man who was coincidentally Gabe's girlfriend Nell's lover almost twenty years ago.

Although there are a few forced dramatic moments including drowning, a trigger happy finger, and an unintentionally abused dog, THE ARCHITECTS ARE HERE is a page turner.
Posted by Janet at 7:12 PM No comments: 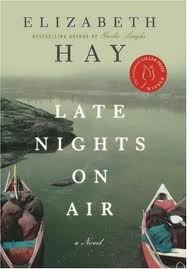 If I find myself slowing down as I'm reading a book I know that's a sure sign that I don't want it to end--I am reticent to be released from the novel's world. That is absolutely true of Elizabeth Hay's new novel LATE NIGHTS ON AIR which is set in a sleepy CBC radio station in Yellowknife where the main characters quickly transform into imaginary friends. Hay knows how to write tenderness and heartbreak and friendship better than anyone else writing today.

You will quickly come to love the irascible Harry Boyd, the beguiling Dido Paris and the irrepressible Gwen Symon, all of whom find their truest selves in the far north.
Posted by Janet at 7:06 PM No comments:

About a week ago I watched the film THE DOOR IN THE FLOOR, based on this Irving novel, in which Jeff Bridges and Kim Basinger give riveting performances as the grief-stricken parents Marion and Ted Cole. I had forgotten how much I enjoy Irving's quirky and flawed characters and how I am swept away by his epic storylines.

So, I went back to my bookshelf and picked up A WIDOW FOR ONE YEAR which tells the story of Ruth Cole, Ted and Marion's only daughter, the summer she was four in 1958 and then in 1990 when she is thirty-six and a famously celebrated NYC novelist who has a penchant for picking unsuitable men, and then in 1995 when Ruth is a widower raising her son Graham and falling in love for the first time.

Irving inhabits landscapes in the Hamptons, Vermont, Amsterdam and Toronto in this fascinating book wherein sympathy for a murdered prostitute is a touchstone.
Posted by Janet at 5:05 PM No comments:

GENTLY DOWN THE STREAM by Ray Robertson (2005)

Hank Roberts is an over-educated, underachieving thirty-something Torontonian who loves his wife Mary, his best friend Phil, his black lab, Barry and rock and roll. When Phil's hottest female novelist girlfriend Rebecca offers Hank a job as a researcher funded by an arts council grant for her next book, Hank declines and picks up a job as a bouncer at the seedy Gladstone Hotel.

A chance encounter in the dog park after his late night shift leads to an unexpected coupling that puts all Hank values at risk. I didn't expect to be so emotionally undone by this book, but Robertson had me sobbing and reaching for a box of Kleenex well before the end.

I'm looking forward to reading his new novel about Kerouac, WHAT HAPPENED LATER, due out this fall from Thomas Allen & Sons.
Posted by Janet at 4:58 PM No comments:

I have a subscription to THE BELIEVER magazine to read Nick Hornby's monthly column "Stuff I'm Reading" and it was there that I read about Clare Allen's debut novel. POPPY SHAKESPEARE is a rollercoaster ride through a mental hospital in North London wherein the day patients, called "dribblers" , barter meds, smoke until their throats are raw and look out for each other's well being. The narrator, N., like her fellow patients at the Dorothy Fish, has the ambition to never be discharged, so each year she is relieved to hear at her assessment that she hasn't gotten any better.

However, when Pollyanna is unexpectedly discharged and is replaced by Poppy Shakespeare who insists she's not mentally ill, N.'s world trembles and she finds herself trusting somebody else for the first time in a very long while.

Allen's diction is snappy and her narrator completely believable. POPPY SHAKESPEARE has been described as a mix of CATCH 22 and ONE FLEW OVER THE CUCKOO'S NEST. If you liked either one of those novels, you really ought to pick this one up.
Posted by Janet at 10:08 AM No comments:

Naiko, the narrator, works in the Undeliverable Mail Office for Canada Post where she tries to reunite people with their lost possessions and orphaned letters, a task that offers a glimpse into the lives of complete strangers. There she meets the enigmatic Andrei, a Romanian refugee with a haunting past. When he disappears from work, Naiko becomes obsessed with finding out what happened to him.

I especially enjoyed the epigraphs at the beginning of each section as well as Naiko's lists of characters's personal possessions which all gesture to the elusive nature of truth. Quotations such as "We do not remember days, we remember moments" and "Dead letters! Does it not sound like dead men?" add another layer of meaning.

Try to distill your life or the life of someone you love into a handful of objects. Maclear's humanity "is an indispensable part of everything she writes. It is the basis of her commitment to history's forgotten people and its undelivered stories. Her voice is exquisite and incisive." Listen to Joy Kogawa.
Posted by Janet at 9:59 AM No comments: 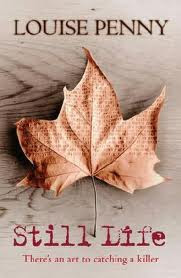 This is Penny's first Inspector Gamache novel set in the idyllic village of Three Pines in the Eastern Townships of Quebec. The characters are affable and endearing and even at times believably irritating. When a beloved local is killed accidentally by a hunting arrow, the townsfolk are eager to help the Surete and Chief Inspector Armand Gamache solve the crime. Penny's strength is her character development and her ability to lead you on the trails of a variety of plausible suspects until through a process of elimination you think you know whodunnit.
Posted by Janet at 9:53 AM No comments:

Set in the days surrounding the G8 summit in Edinburgh in July 2005, this next to last Rebus mystery finds the inspector temporarily discharged alongside his partner DS Siobhan Clarke as they meddle in a case about the apparent suicide of an MP at the Castle. The murder Clarke and Rebus are distracted by, however, involves a recently released rapist as a victim. Many dismiss the murder as retributive justice until Rebus and Clarke uncover evidence that leads them to believe that a serial killer is on the loose.

Because of the extra political excitement of the summit, life on the the streets of Edinburgh is raised to a fever pitch with protestors pitching in to up the ante. When Siobhan has a personal reason for getting even with a riot cop, it seems all will spin out of control and right into the hands of Gerald Cafferty, the don of organized crime.

Rankin's narrative is fast-paced and Rebus and Clarke both witty and convincing. The scene with President Bush apparently happened. Read to find out what.
Posted by Janet at 9:46 AM No comments:

IN THE PLACE OF LAST THINGS by Michael Helm

Russ Littlebury leaves his settling, professional life and girlfriend in Toronto to care for his dying father back home in small town Saskatechewan. Initially torn between love and duty, Russ quickly learns to compartmentalize his life. When his father dies, Russ finds himself on an atypical roadtrip with "Skidder", his father's surrogate son, and his Aunt Jean to get Jean down to her winter home in a trailer park in Tucson. Along the way they meet some of his father's born again friends and Russ finds himself behaving true to form.

Russ's devotion to his father and self awareness make this gritty journey worth your while.
Posted by Janet at 9:41 AM No comments: