THE SWEET EDGE by Alison Pick

Written in the style of Carol Shields' he said/she said novel HAPPENSTANCE, Alison Pick's break out novel THE SWEET EDGE is both lyrical and wise. Her protagonists Ellen and Adam decide to take a break from their three-year relationship. Adam embarks on a solitary canoe trip through the Arctic while Ellen tries to find herself among a new group of friends in the trendy gallery district of Toronto.

Pick's prose is exquisite. THE SWEET EDGE is a novel I wish I could have penned, even through moments of self-loathing.
Posted by Janet at 7:33 AM No comments: 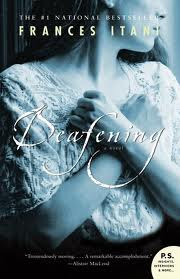 Grania, the protagonist of Itani's first novel--a contender for Canada Reads 2006--lost all hearing after a childhood bout of scarlet fever in the early 1900s. She and her family live in a village close to Belleville, Ontario where they run a hotel. When she can no longer be educated sufficiently by her Irish grandmother, Grania is sent to a boarding school for the profoundly deaf. There, the world of communication opens up to her as she learns how to sign as well as to read lips.

As a young adult, Grania meets and falls in love with a young hearing man. They are married two weeks before he leaves her to serve in the ambulance corps during WWI. His journey at the European front is gruelling. Itani's description of what it was like for those young men who fought for our freedom is absolutely harrowing.
Posted by Janet at 7:47 AM No comments:

King's publicist sent me the galleys for his forthcoming "Dreadfulwater Mystery" in anticipation for the EVENING OF MYSTERY WRITERS I'm hosting in April.

THE RED POWER MURDERS engages the reluctant investigator/retired cop/now photographer Thumps Dreadfulwater to help the sheriff figure out who has killed a retired FBI agent in the local Holiday Inn and why former activist Noah Ridge has come to Chinook for a book launch and then disappeared.

Fans of King's literary novels will chuckle about his self-deprecating humour and allusions to his own work such as "There had been a Native guy come through with a novel that had the word water in the title. Thumps had gone to the reading and had been barely able to stay awake."

Thumps' wary attitude to remaining involved in the case makes you want to flip the pages all the more to find out whodunnit.
Posted by Janet at 8:16 AM No comments:

A PERFECT NIGHT TO GO TO CHINA by David Gilmour

Gilmour's most recent novel won this year's Governor General's award for fiction. I took it out of the library yesterday afternoon and didn't put it down until I turned the final page. Roman, the narrator, makes one fatal error. An evening after he has tucked his six-year-old son Simon in bed, Roman decides to walk down the street to his local bar to have a drink. When he returns to his home 3 pints later, his only child is gone.

What follows is Roman's desperate need to find Simon and the lengths to which he deceives himself about Simon's safety. Gilmour uses magical thinking in a way that will make you want to believe it works.
Posted by Janet at 8:52 AM No comments:

My friend Ben says this is the best book of nonfiction he's read this past year, so I bought it yesterday and read it right through. It's about coming of age in the 1950s in a working class area of Hartford, Connecticut. Two things are gripping: ONE: Mary Ann's rapport with her older brother Tyler who is obsessed with World War II books and has never been to school a day in his life; TWO: her community's relationship with a serial predator who sexually molests and sometimes kills pre-adolescent girls.

The memoir is written in two tracks.

On the first track, chronologically we learn about Mary Ann's French and Italian relatives and her incredible bond with Tyler, an undiagnosed autistic, who is shunned by mainstream society. His acute sensitivity to sound means that even the telephone is swaddled so it doesn't upset him. When he is upset, he compulsively gnaws on his wrist until it bleeds. As an adult, Smith reflects that Tyler was her Boo Radley.

The second track reveals the backstory of Robert Malm, a serial predator born in California, who began assaulting pre-adolescent girls when he was only twelve. Their lives cross paths when, after he has served prison time in his twenties, he ends up working near Hartford. He attacks a 17-year-old girl who tells the police and then molests and kills a 10-year-old girl Irene (one of Mary Ann's classmates) when she insists she'll tell her mother. You are satisfied that he is suitably punished when Smith takes you step by step through his appeal ("I didn't mean to kill her.") and then to the executioner's chair where his end is horrific in order to save his eyes for donation.

Unbelievably gripping and honest, GIRLS OF TENDER AGE, is a must read.
Posted by Janet at 12:34 PM No comments:

BLOOD SPORTS is a gripping and grim tale about the consequences faced by a couple of junkies from Vancouver who have become clean and sober. Tom and his cousin Jeremy have a brutal cat-and-mouse history that usually ends up with Jeremy controlling Tom. Tom and his girlfriend Paulie have a young daughter Mel whom they adore. Tom talks to the police and ends up being a pawn in a game in which he may lose everything.

BLOOD SPORTS is not for those who are squeamish, but it is compelling.

Thomas King writes about Eden Robinson that she "is one of those rare artists who comes to writing with a skill and maturity that has taken the rest of us decades to achieve." High praise, indeed.
Posted by Janet at 6:11 PM No comments: