Marina Endicott's debut novel, GOOD TO A FAULT, garnered my reader loyalty as well as a Giller Prize shortlist nod for her a few years ago. So, I was delighted to receive the ARC of her forthcoming book THE LITTLE SHADOWS, a story grounded in the fantastically rich world of vaudeville in the early years of the 20th century.

After the unexpected death of their father, the Avery sisters, Aurora (16), Clover (14) and Bella (13) take to the footlights to earn a living as a singing trio under the tutelage of their mother, a former vaudeville darling. They share stages with magicians, animal wranglers, and tired comedians across Canada and the United States from 1912 through 1917 always hoping that a future booking will provide them the independent financial security they crave.

Of course there are love affairs that each girl needs to navigate, in the wings and on stage, some of which are genuine and others that are relationships of convenience and cruelty.

Endicott's extraordinary attention to period detail will astonish as you become immersed in the lives and preoccupations of the Avery sisters as they come to realize the essence of a vaudeville life, "dancing, singing, dying, that is all of it."

This year's Giller Prize jury--Andrew O'Hagan, Annabel Lyon and Howard Norman--have plucked THE LITTLE SHADOWS out of the 150+ titles submitted for consideration and given it a place on their longlist alongside Michael Ondaatje and Guy Vanderhaeghe. Because of the grace with which the narrative unfolds I have every expectation to see Endicott's name make the shortlist as well.
Posted by Janet at 3:38 PM 4 comments:

THE LEFTOVERS by Tom Perrotta (2011) Random House of Canada, 355 pages 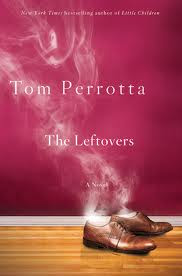 I always greet the news of the publication of a Tom Perrotta novel with excitement and delight. Even if you haven't already read his work, you've at least heard of the two movies adapted from his earlier books: ELECTION and LITTLE CHILDREN. And, if you've seen either of those films, you'll know that Perrotta does not shy away from writing about flawed people like you and me. In fact, through his exposition of their weaknesses, I've certainly come to recognize some uncomfortable truths about myself.

From the opening paragraph of THE LEFTOVERS Perrotta hooked me:

In Mapleton (read Anywhere, USA) on October 14th (3 years ago), something tragic occurred: "It was a Rapture like phenomenon, but it doesn't appear to have been the Rapture," because many of the people who disappeared were decidedly not Christian. The Hindus, Buddhists, Muslims, Jews, Atheists, Mormons and Zoroastrians "hadn't accepted Jesus Christ as their personal saviour." It was a perplexingly (to the loud-mouthed entitled Christians expecting salvation) "a random harvest."

What matters, however, is not who was taken, but rather who is left behind to puzzle out what life means now in the wake of the Sudden Departure. Now that children or siblings or spouses are gone. About loss, Perrotta writes convincingly. When Laurie supports her friend Rosalie as she grieves the disappearance of her daughter Jen and explains to her husband Kevin that "Rosalie doesn't want to finish" the scrapbook about Jen, Perrotta gestures to the timeless quality of accidental death. And, later, when Rosalie decides to join the Guilty Remnant cult (whose loopy motto is "We don't smoke for enjoyment. We smoke to proclaim our faith."), Laurie doesn't pass judgment. She becomes, instead, mute witness both literally and figuratively.

Cut to the three-year-anniversary of the pseudo Rapture and certain departure of beloved friends, relatives and lovers in Mapleton and now Laurie's husband Kevin Garvey is the new mayor who hopes to shepherd along the collective grieving process to offer new hope to his traumatized community in which he has experienced direct loss himself when his wife leaves him to become a silent-vowing cult member of Guilty Remnant and his son Tom drops out of university to follow a sketchy self-appointed prophet Holy Wayne, "the most recent incarnation of that age-old scoundrel, the Horny Man of God," who establishes "the Healing Hug Movement." Unsurprisingly, Holy Wayne knocks up one of his teenaged acolytes, 16-year-old Christine, who is carrying the Chosen One. Really. And, Mayor Garvey means well when he pushes for the inaugural Heroes' Day Parade "to channel the grief into an annual observance, relieve some of the day-to-day pressure on the survivors." But, honestly, how helpful can that be?

There were moments in THE LEFTOVERS that had me guffawing out loud. For example, "Nora Durst hated to admit it, but SpongeBob wasn't working anymore." Imagine that. How could he offer succor or be taken seriously when his sidekick Squidward has "got that creepy phallic nose" that "just dangles there?" Even the pastoral caregivers are worn out, like Reverend Jamieson who admits to Nora that he's exhausted and it feels like his body is "full of wet cement."

Each of the characters in THE LEFTOVERS manages to scratch out a new beginning, through happenstance, deceit, determination or belief. Going home, however, is never a viable option for any of them. Tom Perrotta has written a startling book about love and loss and how to find meaning in a life that is empty of one and rife with the other.
Posted by Janet at 4:23 PM No comments: