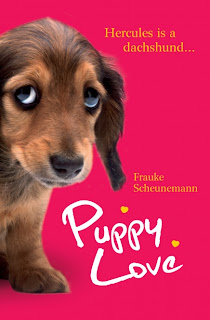 Carl-Leopold von Eschersbach is a 6-month-old dachshund mix ("the product of Mummy's affair with a very dashing terrier") who finds himself at the local animal shelter with a bunch of other curs where he is luckily adopted by a human who smells "like a beautiful summer's day...Very much like flowers, a bit like strawberries, with a hint of peppermint." This gorgeous-scented woman is Caroline, a violin-maker, who will turn out to need the puppy she calls Hercules more than he needs her.

After meeting Caroline's current boyfriend Thomas, Hercules wonders, "Could a love of animals be something that raises the value of a human male?" And, he begins to plot with his feline friend, Mr. Beck, a way to bring a more desirable mate into Caroline's life. When all of their matchmaking plans seem futile, Hercules begins to see the light about the only real option for Caroline, and he couldn't be more delighted for it to work out, but he needs to let the fates find their way.

Frauke Scheunemann has added another adorable voice to the growing pantheon of canine narrators that includes Virginia Woolf's FLUSH and Garth Stein's Enzo in THE ART OF RACING IN THE RAIN.
Posted by Janet at 4:07 PM No comments: 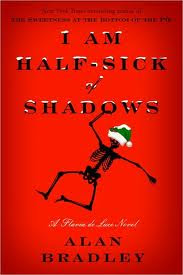 Intrepid, precocious pre-adolescent chemist and sleuth Flavia de Luce returns in this caper set on her crumbling family estate, Buckshaw. In this title lifted from Tennyson's "The Lady of Shalott," Bradley places his protagonist in the shadows of her own home when her father rents out the property to a film crew intent on shooting "another one of those blasted country house things" in order to make ends meet for the next patch.

Peopled with familiar characters from previous books including Dogger, Col. de Luce's faithful batman from the war, and Mrs. Mullett, the cook who can't really cook, the amiable Vicar and the spectre of Flavia's mother, Harriet, slipping between the pages of the next Alan Bradley mystery feels like a visit home for the holidays, spent in the company of folks who know you the best and love you in spite of your flaws.

When the crew from Ilium Films arrives with its star Phyllis Wyvern in tow, "her complexion like cream in a summer kitchen," Flavia's older sisters Daffy and Feely are gobsmacked to be in the presence of such a luminous film idol.

When the jack-of-all-tradesman Mr. McNulty is injured on site, the production begins to unravel. A snowstorm means unexpected guests are forced to batten down at Buckshaw and tempers flare. "Bun" Keats, Phyllis Wyvern's personal assistant, takes to bed from the stress of it all, migraine-bound, and Ms. Wyvern herself keeps others awake through the night as she watches over and over again one of her hit films, until, of course, she no longer can. Flavia discovers their famous guest, dead as a doornail, choked with a swath of celluloid tied around her neck in a decorous bow from the very film that continues to "Slap! Slap! Slap! Slap! Slap!...like a black bullwhip, flapping round and round."

Who killed Phyllis Wyvern and why becomes the delicious mystery that Flavia helps the inspector to solve this time.

Bradley's affection for his protagonist is clear. Only once or twice did Flavia's precocity make my smacking hand itch, but it certainly didn't deter me from enjoying the ride alongside her.
Posted by Janet at 10:53 AM No comments: