My greatest surprise in this Inspector Banks mystery is that nowhere do we read the lyrics in Joplin's refrain that gives the novel its title. PIECE OF MY HEART follows parallel narratives thirty years apart. In 1969, there's been a brutal murder at an outdoor rock concert of a beautiful young woman named Linda Lofthouse. And, it seems that the killer has a penchant for painting little blue cornflowers on his victim's faces.

More than thirty years later Banks investigates an equally gruesome murder of a freelance music journalist who seemed to be researching a controversial piece about the band the Mad Hatters. Discovering how the murders are linked provides Banks with difficult truths about the past and the present.
Posted by Janet at 4:54 PM No comments:

Translated from the German by Joel Agee, this eye-witness account is a little piece of perfection about the Allied bombing of Hamburg from a German survivor's perspective, a meditation on war and hope. The following two excerpts will give you a sense of it:

Now all that was left of the steeple was a pitifully rotted and blackened stump. It had broken off right above the clock, the hour hand was pointing to shortly after one; but was it noon or midnight? And on what date? Above the clock you could still see the word "Gloria" in gold letters. The copper of the roof had draped itself over the nave like a shroud. Only way in back , on a remnant of the sacristy, the golden saint still stood with his steering wheel, pointing a finger into the distance.

So I wrapped a wet blanket around my head and crawled out. Then we went through the fire. Some people keeled over in the street then. We couldn't take care of them. ~ November 1943
Posted by Janet at 11:09 AM No comments:

I picked up this memoir because Stephen King remarks about Karr's extraordinary ability to recreate her childhood with exceptional detail in his biblical tract ON WRITING. I love that she begins with a quotation from Pound's CANTOS--"nothing matters but the quality of the affection in the end that has carved the trace in the mind." So much of what follows is removed from that affection, because Karr's childhood is one rife with horrors great and small.

She leaps right in with a sharp, dark memory when she is seven or eight and being asked by the family doctor to "show me the marks. Please? Just pull this up and show me where it hurts." So much of Karr's narrative hurts. Yet, she has a remarkable way of offering up what happened without blame. That she is able to forgive her mother her outrageously irresponsible behaviour is reason enough to read THE LIAR'S CLUB to negotiate similar paths of forgiveness.
Posted by Janet at 8:34 AM No comments:

Talk about narrative drive! In CAUGHT STEALING, Hank Thompson does a favour for his neighbour Russ by looking after his cat Bud. That favour leads to the unravelling of Hank's life as he knew it. He ends up being beaten by Russian thugs, plays high-stakes hide and seek with dirty cops in the NYPD, rides the subway through Manhattan with a dead body at his side, finds his ex-girlfriend in a compromising position and ends up sitting on the floor of a storage unit in Chelsea counting out laundered bills that add up to over 4 million. At least the cat survives.
Posted by Janet at 7:57 AM No comments:

The daughter of esteemed filmmaker Deepa Mehta, Devyani Saltzman chronicles the difficult journey of making the final film in her mother's trilogy EARTH, FIRE and WATER, but more importantly honestly reflects on the strained relationship she's had with her famous mother since she chose at the time of separation to live with her father.

WATER was plagued with issues during its initial production schedule in India in 1999 when government officials declared that its portrayal of the Hindu widows was false. Locals even built an effigy of Mehta and burned it as well as the sets to the ground.

With new financing, and under the working title FULL MOON, the production starting shooting five years later in Sri Lanka. In Spring 2007 WATER was Canada's submission for the best foreign film at the Academy Awards.

SHOOTING WATER not only helped me to understand the process of film production but also to appreciate Saltzman's honesty about herself and about her resolve to mend the holes in the rapport with her mother.
Posted by Janet at 10:04 AM No comments:

Set in 1962, McEwan's novella charts the journey of newlyweds Florence and Edward, two tentative lovers who discover that what remains unsaid can be hugely damaging to any relationship.
Posted by Janet at 2:04 PM No comments:

THE CRUELLEST MONTH by Louise Penny (2007) 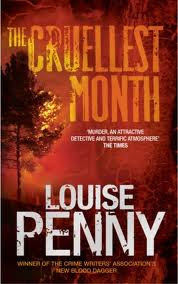 The charming and inscrutable Inspector Gamache is called to Three Pines to investigate the suspicious death of Madeleine Favreau, a fairly recent addition to the community. When a medium is invited to town to hold a seance to spice up the lives of the residents, the ante is upped when they all decide to move the experience to the Hadley house. In this sad home known for its haunting, it seems that the lovely Madeleine has been literally scared to death.

With a series of red herring clues and the typically helpful cast of stock characters including Clara and Peter, Olivier and Gabri, Gamache and his team of investigators solve the mystery in a surprising way which involves embracing the notion that trees have feelings and that the past is never really past.
Posted by Janet at 2:03 PM No comments: