Based on the screenplay by Paul Gross, the novel begins near the town of Arras where Sergeant Michael Dunne is leading his troop through a hornet's nest of Huns in the town square. He find himself thrusting a bayonet into the face of a young German soldier to kill him and to secure his own escape--it is this action that haunts Dunne for the rest of his life.

The narrative shifts to Calgary where Dunne is recovering in a military hospital from his physical and emotional wounds. There he meets volunteer nurse Sarah Mann, who is fighting her own psychological demons. When medical doctors decide Dunne has suffered shellshock, he is officially excused from serving again on the front and instead works in the recruiting office where the officer in charge encourages Dunne to ignore some of the enlisting rules in order to provide sufficient back up recruits for all of the fallen on the front.

In spite of his growing affection for Sarah, who he manages to help wean from a morphine addiction--in his greatest act of kindness--Dunne decides he must return to the front, however inappropriate that is or how broken he may be.

Back on the front near Ypres, the exhausted Canadian troops are about to participate in one of the bloodiest battles of the war. The description of the trenches and the bloated corpses, human and animal, that litter them is one of the strengths of this writing. It is visceral and surreal, but absolutely convincing.
Posted by Janet at 2:42 PM No comments:

EVERYONE WORTH KNOWING by Lauren Weisberger 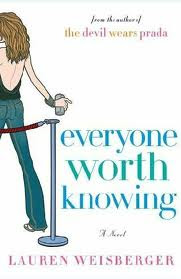 Bette Robinson quits her Manhattan banking job and finds herself happily embracing sloth and organizing her day around Oprah and her favourite soaps and walking her 4-pound Yorkie, Millington. Her fashionable, rich and gay uncle introduces Bette to Kelly (his former personal assistant) who now runs Manhattan's hottest PR firm and the city's biggest events for those rich and famous enough to see and be seen.

Bette finds herself dating an infamous British playboy and thrills her boss by appearing in all of the gossip rags, thereby providing desirable exposure to the firm. This fast life of black Amex cards and Cristal wears thin on Bette and she walks out of the Playboy fete that she was responsible for running in an attempt to reclaim her old self, which is somewhere between the values of her Hippie parents and the spoiled life to which she has become accustomed.
Posted by Janet at 2:34 PM No comments: