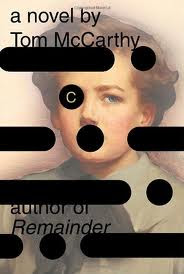 One of the boys at school told me this was the best book he's read this year, and he offered to loan it to me. He's a fairly discerning reader, so I thought I'd give it a try.

REMAINDER opens with the narrator explaining that he has survived an accident which involved "something falling from the sky." His lawyer has negotiated a large settlement whereby his client (always unnamed) will receive over 8 million pounds, if he agrees to never take legal action against the culpable parties.

Friends have suggestions for how to spend this windfall--including buying coke and more coke, hiring hookers off which to snort coke, setting up a foundation to provide humanitarian aid. However, the survivor is not terrible interested. Instead he decides to hire someone to completely recreate one of the distinct memories he has--of living in a run-down building where a pianist stumbles over the same part of a concerto and a frumpy middle-aged woman cooks liver every day.

By hiring actors and set designers to fulfill this re-enactment fantasy, our man hopes to reboot his lost memories. What happens instead is rather sinister. He takes on the persona of a god in charge of his world and moves beyond controlling his apartment complex to re-enacting neighborhood crimes including murders of drug lords.
Posted by Janet at 8:28 AM No comments:

BESIDE STILL WATERS by Barry Callaghan (2009)

This is Callaghan's rewrite of his novel THE WAY THE ANGEL SPREADS HER WINGS--copping on to the right established by James Joyce when he "wrote" PORTRAIT OF THE ARTIST AS A YOUNG MAN, making the Stephen Daedalus tale all the more accessible to readers.

Callaghan has done the same here.

His protagonist finds his way to an African leper colony, rediscovering his true love en route. The diction is poetic and as such rife with rhythm and rhyme that allows you to creep inside the son-of-a-blues musician's head, a place Callaghan is clearly comfortable inhabiting.
Posted by Janet at 9:34 PM No comments:

This mystery was recommended by a panel discussion on CBC radio around Christmas time as one of the best books of its kind in 2008.

P.D. James is inching towards 90 years old and she continues to write stories that are intelligent and compelling. In THE PRIVATE PATIENT, investigative journalist Rhoda Gradwyn makes an appointment to have a facial scar removed at an exclusive clinic in Dorset where she will be guaranteed her privacy. She's had the scar since she was a child and her drunk father sliced her cheek open with a beer bottle shard. Her mother kept her home from school for a few days and they've always insisted that the reason for the scar was that Rhoda mistakenly walked into a kitchen cupboard. Her father's recent death prompts her to make the appointment with the revered plastic surgeon George Chandler-Powell. (Why is it that so many British characters have hyphenated last names?)

Rhoda's surgery is by all accounts successful, but it doesn't matter a whit since she's found strangled to death in her room two days later. Commander Adam Dalgliesh is called by 10 Downing Street to investigate because another patient at the time awaiting her own surgery is the wife of an influential politician. While Dalgliesh and his team scour Cheverell Manor for clues, there are two other unusual deaths.

It is the humanity of Dalgliesh the resonates through the book and we are rewarded with his wedding to a worthy woman in the end.
Posted by Janet at 9:23 PM No comments:

Redfern's Victorian Detective novel featuring Owen Endersby is engaging and rife with the messy life of London's underclasses. When theatre entrepreneur Samuel Cake is gruesomely beaten to death in his own home, it takes all of Endersby's patience, compassion and puzzling to figure out who the murderer is.

Flipping through these pages you will feel the life on the dirty streets and on the boards of the Old Drury theatre where some hopes are raised and others are squashed. Under Redfern's pen, that time is vividly created with especial attention to the difficult moral decisions that the disenfranchised face daily in order to survive.
Posted by Janet at 10:36 AM No comments:

I only became aware of O'Neill's writing through his review of the Beckett Letters in the Sunday New York Times a couple of weeks ago. His kicker involved a hand scribbled note from his fellow Irish expat--a cherished private possession. So, I picked up O'Neill's novel NETHERLAND, posing as one of the "Best bets" at my local TPL branch in the Beach.

The cover claims that the story is "stunning with echoes of THE GREAT GATSBY," and I agree. O'Neill's narrator Hans, a Dutch-born, London-based investment banker, begins to unravel his tale in a modulated voice that is reminiscent of tone and style of Fitgerald's Nick Carraway.

In the late 90s Hans and his British-born wife Rachel move to NYC as their professional lives rocket to the top and find themselves both bewitched by the city that never sleeps and altered by being first-hand witnesses to 9/11 as they are forced to evacuate their chic loft and move into the Chelsea Hotel with their infant son Jake. Rachel decides she cannot raise Jake with the ghost of 9/11 terror looming, and moves back to London while Hans remains in New York.

Free to roam the city at all hours of the day and night, Hans finds himself rekindling a love for cricket which thrives under the watchful eye of Trinidadian born idealist/operator Chuck Ramkissoon, the Gatsby figure whose corpse mysteriously washes up in the river at the beginning of the novel, and whose presence in both Hans's life and ours by extension is the reason Hans is compelled to tell this story.
Posted by Janet at 9:21 AM No comments:

WHERE ROSES FADE, NAKED TO THE HANGMAN, CALL THE DYING and THE LAST FOUR THINGS (4 thrillers) by Andrew Taylor

Three of these books are in the series set in Lydmouth, a sleepy English village, post WWII involving Detective Richard Thornhill, his ambitious underling Brian Kirby and other locals including Thornhill's on again off again mistress Jill Francis, a journalist, and their friends Philip and Charlotte Wemyss-Brown.

On the surface Thornhill is an affable man who is driven to mete out justice. Yet, as we discover, he has a complicated professional past when he was seconded to serve in Palestine and used as a patsy by his commanding officer. The horrors of that time resurface and push him towards a breakdown and a temporary leave of absence when he is forced to confront the truth that his young daughter's abduction is his fault.

THE LAST FOUR THINGS is a departure from the Lydmouth series and moves to London where Lucy Appleyard, the only child of a police officer and a controversial female priest in the Anglican church, is snatched from her babysitter. What is atypical in this book is Taylor provides the psychopath's point-of-view and manages to create sympathy for someone who certainly doesn't deserve it. There are predictable plot twists, but also a few that I didn't see coming, and one gruesome event that in its credible horror made me dissolve into the story and miss my bus stop. The ending sets up the second book in the Roth Trilogy which promises to be equally gripping, albeit upsetting, since "man's inhumanity to man" will surely be the fare.
Posted by Janet at 10:20 AM No comments: