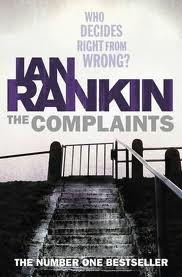 Taking place over the course of 18 days in February in Edinburgh, this newest Rankin crime novel doesn't miss a note, even though I still pine for DI Rebus whom he stopped writing about two books ago in EXIT MUSIC.

Malcolm Fox is a more ordinary fellow, though like Rebus, he's not so lucky in love, having been divorced from his spouse after less than 2 years together. Malcolm has a sister who gets knocked about by her boyfriend and an aging father who is in a facility for which Malcolm foots the full bill without a grudge. Malcolm sees himself as the caretaker for both, though it's not until his sister's boyfriend shows up in a morgue that Fox acts on his genuine concern.

Because he is incapable of letting sleeping dogs lie, Fox finds himself on the wrong end of a promise and is suspended from the Complaints department with pay. He and another cop with a conscience, Jamie Breck, take the law into their own hands and get into even more trouble along the way to resolution.

I will read anything that Rankin pens and hope that this isn't the only time I'll be reading about Fox, though I do hope that he'll find more to do than alphabetize his exploding book collection in his spare time.
Posted by Janet at 8:38 PM No comments:

TIME WAS SOFT THERE by Jeremy Mercer

This was a dreamy little memoir of the English language bookshop with heart in Paris, originally founded by Sylvia Beach who famously loaned books to Hemingway and published Joyce when no-one else would look at his writing.

I especially loved meeting the current octogenarian owner George, a true Renaissance man, with the heart of ten thousand men.

Did you know that you could move in to Shakespeare and Company and work in the bookshop if you are a writer passing through?
Posted by Janet at 7:27 PM No comments:

TOO MUCH HAPPINESS by Alice Munro (2009) 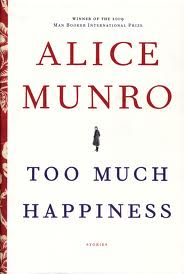 You can't rush reading Alice Munro. I savoured each story and felt altered by every one of them. Violence shimmers under the surface, yet each flawed character draws attention to our own humanity.

Too Much Happiness is a collection not to be missed, nor is it for the weak of heart. Here is 78-year-old Alice Munro at the peak of her storytelling powers--until she dazzles with her next book, of course.
Posted by Janet at 7:26 PM No comments: