THE KILLING CIRCLE by Andrew Pyper (from the uncorrected proof)

Patrick Rush is a widower raising his young son Sam. He has been demoted as an entertainment critic for the National Star to a t.v. reviewer, forced to write pandering commentary about reality television which he scorns. He decides to join a writer's group to force his hand at fiction, but at the Kensington Circle, Patrick gets more than he ever expected.

This is Pyper's fourth novel and it is as gripping as his first three (LOST GIRLS, THE TRADE MISSION and THE WILDFIRE SEASON). The narrative is like Russian dolls, story nesting in story, and its clever, albeit contrived, structure never disappoints as it moves to its redemptive conclusion.

The psychological terror was so convincingly palpable that I found myself yearning for the light of day.

THE KILLING CIRCLE will be published by Doubleday Canada in August 2008.
Posted by Janet at 8:53 AM No comments:

A truculent octogenarian widow has her head bashed in and her housekeeper is accused and quickly pursued by the police who terrify her so convincingly that she throws herself in front of a train, never able to defend herself against the accusations.

Inspector Brunetti is put on the case after a neighbour comes forward to defend the housekeeper. What is revealed is a nefarious path to blackmail that involves the widow's only son and implicates officials in the Board of Education.
Posted by Janet at 7:54 AM No comments:

OUT STEALING HORSES by Per Petterson (2007) 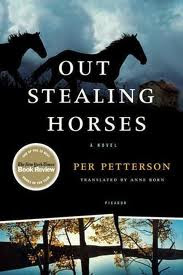 Retired Oslo Native Trond moves to splendid isolation in rural Norway with his adopted dog after following the deaths of his wife and his sister. There he contemplates a tragedy in his past that reforms itself in a reconnection with his friend's younger brother, now a middle-aged man himself who happens to be a neighbour.

Petterson collapses present and past seamlessly in this haunting and eloquent story of forgiveness and redemption that won the 2007 Dublin IMPAC literary award.
Posted by Janet at 7:48 AM No comments:

In this first novel set in rural England in 1947 and 1957, Jones primes the pump with secrets and rumours among the upper class. Lewis Aldridge returns home at nineteen after serving two years in jail for burning down the local church where his family worshipped a few years after the accidental death of his mother Elizabeth--one that he witnessed helplessly at the age of 10. His return to his father and his stepmother's home leads to new trouble in the two weeks before he reports for service in the British Armed Forces.

Kit Carmichael, a few years younger than Lewis, watches from afar as the local community makes it very difficult for its prodigal son to start over. The younger daughter of a prominent businessman revered by the townsfolk has her own secrets to protect.

I couldn't put this book down and can't believe that it's a first novel. Jones's narrative voice is the true thing.
Posted by Janet at 7:45 PM No comments:

TWENTY CHICKENS FOR A SADDLE by Robyn Scott (2008)

When she was six, Robyn Scott moved with her family from New Zealand to Botswana and met her grandparents for the first time. When Robyn's parents Kevin (a flying MD) and Lin (an Oxford-educated rebel) decide to transport their three small children to live in what was once a cowshed in a tiny village, everyone is excited about the possibility of the adventure.

The children adapt easily to being home-schooled and to the new flora and fauna, including snakes and scorpions. In a memorable scene, their grandfather dribbles grape juice out of both corners of his mouth for giant moths to drink as they perch on the ends of his moustache.

Scott is only 28 and she writes with grace and conviction and pure delight in the daily routines of her remarkable childhood.
Posted by Janet at 7:40 PM No comments:

Commissario Brunetti is one of those detectives you wish you could find around your dinner table. He is kind, smart, well-read, thoughtful and determined to see the increasingly elusive justice served in his hometown.

As Venetians prepare for the awful winter flooding of the acqua alta by donning high rubber boots and sloshing through the cobbled streets, Brunetti finds out that his friend Brett, l'Americana, who is an expert in early Chinese pottery and ceramics, has been horribly beaten by Sicilian strangers in the comfort of her exclusive palazzo while her girlfriend, the reigning diva, Flavia Petrelli, is singing along to one of her own recordings at full blast in an adjacent room.

As the waters rise, Brunetti discovers the corpse of the director of the Doge's museum--the very man Brett Lynch was disuaded from contacting by her attackers. Will she be next?

Leon balances the tension and the horror of Brunetti's work life with the loving stability of his home life with his professor wife Paola and their adolescent children Chiara and Raffi.
Posted by Janet at 8:37 PM No comments:

THE SECRET LIVES OF PIPPA LEE by Rebecca Miller (2008)

Pippa Lee--a fifty-something third wife to the publishing lion Herb-- moves with her 80-year old husband into a retirement community after liquidating the trappings of their Manhattan life before Herb finds himself further and further along the path to decrepitude. Pippa is a doting wife, supporting her artist husband, who expects it. Their grown children, Grace (a photographer) and Ben (a soon-to-be-called-to-the-bar lawyer), are interesting and interested.

I enjoyed the witty repartee of the present in the novel, but found the flashbacks to Pippa's past where she worked as a model for an S&M lesbian filmmaker trying a little too hard to be hip.

The novel is currently in development as a film starring Alan Arkin, Julianne Moore and Winona Ryder, directed by Rebecca Miller. I am curious enough about the adaptation to go and see the movie when it's released.
Posted by Janet at 8:30 PM No comments: 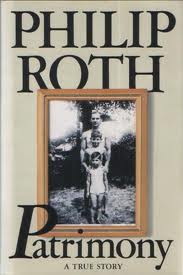 A friend of mine loaned me this memoir because both of us are working on manuscripts that include people learning to live with inoperable brain tumours.

Roth deals with his own father's diagnosis at 86 with directness and compassion and a certain wariness when surgeons are keen to put him under the knife to carve out bits and pieces of the brain tumour that has affected his hearing and his facial muscles: he looks as though he's either suffering from Bell's palsy or has had a stroke, and finds it next-to-impossible to eat and drink without dribbling the contents all over himself.

His father, ever the enthusiast in other people's lives, wants to have his writerly son help one of the retirees from the Jewish Y get his manuscript published. In an hilarious scene over a meal in the elder Roth's modest apartment, the friend, a Holocaust survivor, hands over the draft to Roth-the-younger's chagrin, especially when he realizes that the old man has written a pornographic memoir that he's having his own daughter edit to improve the English translation.

Philip Roth's appreciation for life is heightened all the more when he finds himself in surgery for an unexpected quintuple bypass about which he lies to his father not to add to his worry, a decision that upsets both of them.

Roth looks past all comfort and condolence to mine the truth about himself and about his father and about death and our fear of it. This is an extraordinary book, strengthened by the power of Roth's narrative genuis.
Posted by Janet at 7:55 PM No comments: 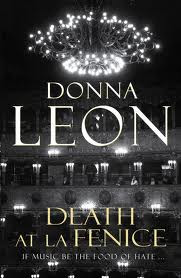 Chief Inspector Guido Brunnetti is assigned the case of an apparently murdered maestro, who was poisoned in his dressing room, it would seem, during the intermission at La Traviata he conducted in Venice's renowned La Fenice opera house.

As Brunnetti tries to create a profile of the victim, he learns that he was openly homophobic, to the point of preventing talented singers from receiving roles to meddling in their personal lives. The inspector digs into the Maestro's past and peels back rumours about his Nazi affiliation and previous affairs that ended badly.

Leon doesn't flinch from tough questions, nor does she candycoat human behaviour, especially when it's reprehensible.
Posted by Janet at 8:43 AM No comments:

THE TRANSLATOR: A TRIBESMAN'S MEMOIR OF DARFUR by Daoud Hari (2008)

My friend Ben invited me to meet author Daoud Hari at a little event last week as he was passing through Toronto to promote this extraordinary book. He is shy, soft-spoken and sweet-natured--all the more remarkable when you read about his life in Darfur.

The book opens with the African proverb: "If God must break your leg He will at least teach you to limp." Hari's resilience throughout his harrowing journey is astonishing and he unfolds his tale in a matter-of-fact, direct and distinctly unpitying way. Take for example his reflection about not being killed (something that happens repeatedly): "To not get killed is a very good thing. It makes you smile again and again, foolishly, helplessly for several hours," or his understanding of camels: "A camel, by the way can be away from its human family or camel family for twenty years and still know them very well when somehow it comes back. Camels are completely loyal and full of love and courage."

Or what about his comment: "It says everything about this land to know that even the mountains are not to be trusted, and that the crunching sound under your camel's hooves is usually human bones, hidden and revealed as the wind pleases."

That this man is still hopeful about humanity is what is most moving when you consider his experience in burying his brother Ahmed after an attack on their village where Ahmed stayed behind to defend with other young men, similarly slaughtered: " I found Ahmed. The effects of large caliber weapons and perhaps an RPG round were such that I barely recognized his body. I dug a grave as we do, so that he would rest on his right side with his face to the east. I put the pieces of this great fellow in the deep sand forever."
Posted by Janet at 8:26 AM No comments: