Bushnell catapulted to fame with her novel SEX AND THE CITY in the nineties, and followed that with another LIPSTICK JUNGLE, also purchased and developed for a t.v. series. ONE FIFTH, her latest entre into spoiled life in Manhattan, seems destined for the same trajectory. Definitely the doyenne of Chick lit, Bushnell returns to expected topics such as class, wealth and sex in an elite building with its prestigious address on Fifth Avenue.

It is difficult to find sympathy for characters who spend their days blogging and whinging about earning only 350K/year while neighbours spend a third of that on new photography. The character for whom I felt a pang of empathy ended up predictably snuffed out. And, try as I may, I couldn't feel anything for the beautiful people who were destined to be together from the opening chapter, but not before they engaged in sexual antics with unsuitable partners.
Posted by Janet at 2:22 PM No comments: 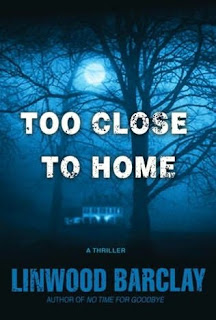 Aside from Andrew Pyper's gripping and chilling THE KILLING CIRCLE, I have rarely been so disturbed by a crime fiction novel. Barclay manages to create a world that feels too close to home itself with characters who are flawed with real human instincts, so believable that I began to wonder if I were one of them.

A triple murder takes place in rural upstate New York. The folks next door, the Langleys, are shot execution style in their home, while Adam Langley's best friend Derek Cutter cowers in their basement, witnessing their deaths by the sounds above him and one of the gunmen uttering simply, "shame."

Soon enough Derek's parents, Jim and Ellen, are drawn in to the darkness that threatens to destroy them all as well as the reputation of the mayor and the college president.

I couldn't wait to finish reading this caper, but there were parts that I had to read in daylight
Posted by Janet at 6:49 PM No comments:

A CURE FOR ALL DISEASES by Reginald Hill (2008) 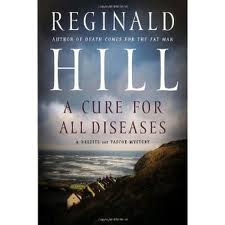 This is one of the books praised by CBC Radio's mystery panel over the holidays, and my copy arrived last week at my local Toronto Public Library branch. I haven't read any other novels by Hill, but the wit and dialect and playfulness of this one have piqued my curiosity and I'll be looking for back titles on the shelves.

The novel opens with Detective Andy Dalziel convalescing in a peaceful seaside rehab centre in Sandytown. Dalziel has been given a handheld digital voice recorder as part of his psychological therapy and he christens the brushed nickle machine "Mildred" and confides all to her, from his intended trysts to his observations about the locals.

Two principal landowners in the sleepy seaside town seem to have different agendas about the town's intended development and one of them ends up murdered in a gruesome way.

The complimentary plot line, like a complimentary therapy itself, is provided through emails from budding psychologist Charlotte Heywood to her sister who is nursing in Africa. Charley rattles on about the locals and then immerses herself in the case especially as the corpses begin to pile up.

I felt like I could sit down and have a pint with Dalziel and any number of the peculiar locals in a town where indeed death is the cure for all diseases.
Posted by Janet at 6:40 PM No comments: 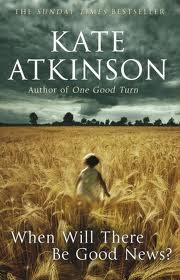 Through predictable twists and turns demanded by fans of the genre, Atkinson weaves together each narrative with no ends even frayed by the conclusion of the novel. And, it's a smart read as well with Atkinson flexing her literary chops that earned her the Whitbread prize for best first novel with BEHIND THE SCENES AT THE MUSEUM--another must read in her portfolio.
Posted by Janet at 6:34 PM No comments:

If there is only one book you must read in these dreary and interminable winter months of little light and loads of snow (at least here in Toronto), it is this one. I haven't felt as transported by a tale, so completely rapt by its telling since I read TO KILL A MOCKINGBIRD when I was thirteen.

This epistolary gem follows the life of British writer Juliet Ashton in 1946 who quite by accident receives a letter from Dawsey Adams, a resident of Guernsey, who has read a book about Charles Lamb in which Juliet's name and address are inscribed in the flyleaf. That book changes Dawsey's life and Juliet's too. She becomes entranced by their correspondence and what is revealed about the German occupation of that Channel island during World War II.

This is a book for people who love to read and who understand the balm that a well-told tale provides, that literature can be a life force.

There are many wonderful surprises here, not the least of which is the proof of the kindness of strangers many times told. Don't be surprised to find yourself searching, among other treasure hunts, for a children's story about a cat named Solange.
Posted by Janet at 6:36 PM No comments:

This is a quiet little novel (167 pages) by the Nobel laureate and Princeton professor who has made slave narratives her fictional voice.

Set during the infancy of the slave trade (1680s) when virulent religious and class divisions became entrenched in the Americas, race hatred takes root.

A MERCY follows the stories of several women: Florens, a small slave girl received as payment for a bad debt by a good Catholic plantation owner; Lina, an older servant in the same home whose tribe was decimated by small pox; Sorrow, a strange girl who spent her early years at sea dressed as a boy; Rebekka, the white mistress of the house, herself a victim of religious intolerance back in England, and Florens' mother who has to make the horrible decision to send her daughter away in order to save her.
Posted by Janet at 6:29 PM No comments:

I haven't read any of Bowen's other Joanne Kilbourn mysteries, but I will be reaching for them now on the bookshelves at my local library after this fast-paced and engaging read.

Joanne's legal eagle attorney husband Zack receives an upsetting call during the festivities of his 50th birthday fete in their backyard. It's the police with the news that a local call girl has been murdered and two of the names on her high-profile list of clients are Zack's and his friend Ned Osler's--and Zack is still reeling from Ned's recent suicide.

Zack is determined to reveal all truths, while Joanne, shocked by this revelation about Zack's sexual past, tries to muddle through by throwing herself into her work, a project on women and politics. How these two navigate hurt and negotiate a supportive and loving relationship is one of the unintended mysteries.
Posted by Janet at 6:21 PM No comments: 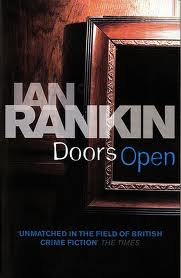 This is Rankin's first non-Rebus novel and he departs from the detective as good guy here to profile an unlikely coterie of folks interested in an unusual art heist.

Mike Mackenzie is a self made man with millions to burn. When a longtime friend introduces him to a scheme to steal/replace art in a storage facility for the National Gallery, his avarice for owning a particular portrait, not likely ever to appear on the open market, gets the better of him and he agrees to participate.

Add a talented forger, hand-picked by the director of Edinburgh's art school, a lonely banker with an art-lover's passion and a known thug and you have an unlikely alliance where they are able to just about pull off the perfect crime. There's a meddlesome detective named Ransome, a Hell's angels operator named Hate and a greedy girlfriend who mess it all up.

I missed Rebus, but certainly allied myself with Mackenzie in his quest to impress the art auctioneer with the uncanny resemblance to the portrait he temporarily acquires.
Posted by Janet at 6:14 PM No comments: