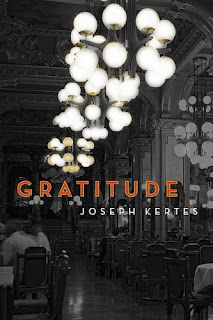 Joe Kertes captivated me with his opening scene in 1944 Hungary where 16-year-old Lili crouches behind a wardrobe in her parents' bedroom wearing the bridal dress her mother presented her with earlier in the day. As her birthday cake bakes and then burns in the stone oven downstairs, Lili considers the fates of her family--her mother hiding in the field with her younger siblings and her father off showing the new authorities the family's papers.

As German occupation closes in upon Hungary, in the months ahead over half a million Jews will have been murdered. Through terrible circumstance, Lili finds herself welcomed in to the Beck family in Budapest where she waits with the hope of being reunited with her own lost family when the occupation ends in January 1945.

GRATITUDE explores the complexities of the human psyche in its darkest hour and offers a tender portrait of a European empire's last days.

Since our theme at RSGC this year is gratitude, when this fine novel is published by Penguin Canada this spring, all of the staff and students will be reading it.
Posted by Janet at 9:02 AM No comments: 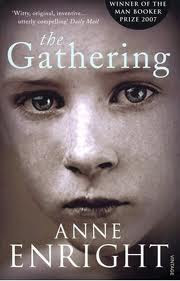 I heard Anne Enright interviewed at IFOA shortly after she was awarded this year's Booker Prize for THE GATHERING. She is spunky and unforgiving in conversation, suggesting to her interviewer that "surely only an eejit would ask that about my book." I warmed to her immediately because of her directness.

THE GATHERING chronicles the days surrounding the death of Liam Hegarty, the most wayward of the Hegarty children, as told by his older sister Veronica. That the family is dysfunctional is an understatement. Veronica shepherds the mourners who gather around her younger brother's corpse laid out in the front room of her mother's house, and tries to decide whether or not to reveal an awful truth about their shared past.

These lines from the opening chapter show you the beauty of Enright's prose:

"I wait for the kind of sense that dawn makes, when you have not slept. I stay downstairs while the family breathes above me and I write it down, I lay them out in nice sentences, all my clean, white bones"
Posted by Janet at 9:21 AM No comments:

James Hillyer, a retired Victorian Lit professor, receives an upsetting call from his only daughter Susan, a headmistress at a British boarding school. James finds an outrageously expensive next day flight out of Toronto to spend the week with Susan as she tries to make sense of her recent diagnosis.

While in London, James has a chance meeting with an irascible man named Gabriel whom he'd met one summer in the eastern townships of Quebec about sixty years previous when they were young men in the bloom of youth. Gabriel makes an unlikely proposition to his erstwhile friend and through happenstance James finds himself face to face with tender ghosts of his past.

I borrowed the book from the library earlier today and could not put it down. Wright not only explores the rapport between fathers and daughters but also our greater understanding of loss. And, he does so with kindness and a lack of judgment.
Posted by Janet at 9:50 PM No comments:

Although Wright is known for his detective fiction, FINDING HOME is a departure from that as a literary novel. Will Prentice is a successful middle-aged Toronto businessman recently cuckolded by his wife of 30 years. His mother's death in England provides the impetus for him to reconnect with his remaining relatives and to refamiliarize himself with the landscape of his youth. His nephew Fred, a recent Cambridge grad with time on his hands, offers to be Will's personal guide across the English countryside.

When Will's aunt (his mother's sister) gives him old photos of his mother with an unfamiliar man, Will begins an intriguing journey through her past and discovers that she was a woman way ahead of her time.
Posted by Janet at 11:01 AM No comments:

I almost put the book down when I discovered that the Stanley Moss, a retired florist, is suffering from a brain tumour since a friend of mine is slouching his way towards death with the same ailment. However, Babiak throws a curve ball early on and Stan finds himself feeling unaccountably well on his way to see his palliative care MD. So well that he's able to hurl a couple of punkish teens up against a car en route, his retributive justice delivered by hand. Who wouldn't want to believe in this kind of wish fulfillment?

Other characters who seem rife for divine intervention find themselves making a pilgrimmage to Banff where Stan himself is heading because he is compelled to go with his wife Frieda. An unlikely troupe gathers: a 24-year-old hockey player who had once dreamed of making the NHL who has tossed his last punch in front of his young daughter; a 17-year-old Muslim woman who has disappointed her family in Montreal by having sex publically with a white boy; a 30-something entertainment executive who has just survived a concrete slab falling from the sky and narrowly missing her in her Hummer; and Moss's former brother-in-law Alok, a New Age guru who believes that Stan is the new Messiah.

Somehow Babiak manages to make this dark comedy about love, death, the afterlife and sasquatches, yes sasquatches, not only plausible but desirable.
Posted by Janet at 4:56 PM No comments:

Clewes moderated a panel of male writers recently at IFOA and in spite of David Gilmour's petulance and determination to sink their collective ship of discourse, Clewes remained gracious. His good manners led me to pick up his memoir FINDING LILY which chronicles his journey after the suicide of his wife Erin.

FINDING LILY is a little piece of perfection like Calvin Trillin's ABOUT ALICE. Both men unabashedly chronicle their feelings about the women they loved and how life in the void of their deaths is changed utterly, to quote Yeats.

Unlike Trillin, Clewes decides to travel in search of self and in search of the why that culminated in Erin's death when she flung herself from her mother's balcony. Part of Clewes's journey leads him to filling sketchbooks with daily observations and mailing postcards to himself to affirm his existence.

Jim Harrison wrote that this "is an engrossing book. It is one thing when a mate dies and quite another when the reason is suicide, which calls existence into severe question. Clewes struggles, and I think, succeeds, which means he finally understands. This is the most anyone can hope for."
Posted by Janet at 4:42 PM No comments: 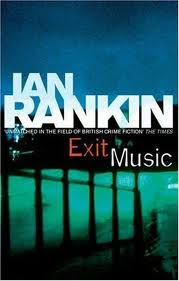 It's D.I. John Rebus's final fortnight on the force and he is relegated to the sidelines when he is in the wrong place at the wrong time and implicated in the attack on his longtime nemesis Big Ger Cafferty. Rebus's partner, Siobhan Clarke, has been put in charge of another investigation that involves the beating and subsequent murder of a Russian poet named Todorov.

Since I recently co-chaired an event here in Toronto with Ian Rankin appearing on stage with Margaret Atwood in support of PEN Canada, I was thrilled to see that Rankin had written PEN into the storyline since the visiting Russian poet is a guest of the university in Edinburgh as well as of the local PEN chapter.

Fans of Rebus will be sad to see him retire, since Rebus has aged in real time over the years Rankin has been writing him, but will not be disappointed in his final song. Rankin's powers as a storyteller continue to grow.
Posted by Janet at 4:36 PM No comments: