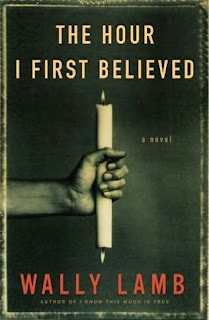 This novel is a doorstop at 700 pages, but it is worth every ounce of its heft in storytelling. In the traditions of Charles Dickens, Robertson Davies and John Irving, Wally Lamb constructs a complicated tale that is grounded in humanity and its immense capacity for good and evil, secrecy and forgiveness.

The narrator is 47-year-old Caelum Quirk, a high school English teacher who has moved to Littleton, Colorado with his nurse wife Maureen. In April 1999 when Caelum is called away to his hometown in Connecticut to bear witness to his Aunt Lolly's final exit, his wife finds herself taking shelter in the library of Columbine High School where now infamously two teenaged boys mowed down several classmates before turning their guns on themselves.

Maureen suffers from post-traumatic stress disorder and becomes addicted to prescription meds. In order to attempt to put at least some geographic distance between themselves and the massacre, the Quirks move back to Three Rivers and into the farmhouse where Caelum grew up. There, with the help of tenants from New Orleans, on their own redemptive quest post-Hurricane Katrina and its physical and psychological devastation, Caelum begins to understand and meet his own grief and fear and anger about his past and about his future which, in the short term, is without Maureen since she is serving time for manslaughter--having killed a bright and beautiful young man while she was stoned and behind the wheel of her car.

There is pain on every page of this book, yet it is bearable, because Lamb manages to lift its veil and reveal the true beauty that sometimes follows.
Posted by Janet at 8:23 AM No comments:

GIOTTO'S HAND and THE TITIAN COMMITTEE by Iain Pears

In the first, a letter turns up offering details about one of "Giotto's" (the nicknamed thief, not the esteemed painter) earliest heists and dispatches di Stefano to Florence without delay to investigate. While Flavia is there interviewing an ailing old woman, her boyfriend, art dealer Jonathan Argyll uncovers possible leads of his own in England. When he discovers his lead, dead at the bottom of the stone stairs in his rented cottage, Argyll rightly suspects foul play, especially in this little English town where the townsfolks' mouths are tighter than drumskins. What both Argyll and di Stefano discover as the truth is a little surprising and ultimately satisfying, including a lovely tiny, overlooked da Vinci sketch that sets the world right again.

In the second, Flavia spends time in Venice investigating the Titian Committee--a political body of art specialists responsible for cataloguing and identifying the master's work. To be on the committee is a plum career appointment, so when one and then two of its members is found dead, di Stefano knows there's more to these academics than meets the eye.
Posted by Janet at 8:14 AM No comments:

The title of this Guido Brunetti mystery is misleading, but don't let that dissuade you from dipping into Leon's series set in Venice. There are two storylines that weave in and out, one about a potentially corrupt priest who may be "fleecing his flock" for all the euros he can muster, and the other involving a dead girl (a gypsy from the fringes of society) whose corpse surfaces in one of the calles near the home of a wealthy family.

What strikes me most about Leon's books is the compassion with which she suffuses Commissario Brunetti and his genuine gratitude for the loving family that supports him.
Posted by Janet at 11:07 AM No comments:

Donna Leon's most recent Inspector Brunetti mystery aptly plays on the double entendre of the title which not only hints at the fact of cosmetic surgery of one of the main characters, but also at the change of attitude that follows discovering the truth about assumptions.

The woman at the centre of this mystery is Franca Marinello, La Superliftata, a long time friend to Contessa Falier, Brunetti's rich and powerful mother-in-law. She seems a cliche with her much older husband and a face disfigured by excessive plastic surgery. However, there is, of course, more to Marinello than meets the eye. She reads classics, including Ovid, and Brunetti finds himself unusually drawn to her.

Smart, engaging and utterly human, ABOUT FACE is worth your time.
Posted by Janet at 2:59 PM No comments:

The eleventh in the Temperance Brennan series, DEVIL BONES has the North Carolina forensic pathologist working on interlocking cases that include human remains found in a cauldron with relics from a religious ceremony, a headless corpse on the shore of a nearby lake and the unexpected death of an innocent Wicca member.

There are graphic descriptions of autopsies that are visceral and not for the weak-stomached in the crowd.

The plot twists push the plot forward, though the romantic subplot of potential suitors is tiresome.
Posted by Janet at 7:58 AM No comments:

THE WHOLE TRUTH by David Baldacci (2008)

This breakneck speed-paced thriller is the first of Baldacci's that I've read, simply by accident as it was one in a mound of books loaned to me by my friend Pat--one of the most discerning and voracious readers I know.

Anyone familiar with the premise of the movie WAG THE DOG will understand the temptation that governments might have to fabricate war for financial gain.

In THE WHOLE TRUTH, billionaire Nick Creel decides he's going to do just that. Manufacture the idea of war, with self-made martyrs, that will jump start his arms dealing with the Chinese and Russian governments. While you're following Creel's sinister plans (which are tempered by bursts of philanthropy to make him feel less guilty), you also follow Shaw, a freelancer of sorts, who sorts out the baddest of the bad through independent contracting with a nefarious underbelly.

Shaw has little regard for the value of his own life until he falls in love with an intelligent and stunning German-born beauty named Anna who works for a think tank in London. Once he proposes to Anna and she accepts, his professional life begins to unravel and he finds himself in terrifying situations with the scum of Europe and the Middle East, barely escaping each time, and never without the help of his controlling boss Frank. Of course there are dirty agents as well as the unexpected kindness of strangers to propel Shaw's story forward to a satisfying end.

Baldacci has me hooked. He has also co-founded a non-profit organization dedicated to supporting literacy across the USA. Check out his foundation at:

www.wishyouwellfoundation.org
Posted by Janet at 2:42 PM No comments:

Books Two and Three of Taylor's Roth trilogy (THE JUDGEMENT OF STRANGERS and THE OFFICE OF THE DEAD) can be read independently, but when read in the light of the first in the series, THE FOUR LAST THINGS, enrich the understanding of the characters whose lives intertwine over the decades and you begin to understand the psychopathology a little better.

Book Two begins in 1970 when David Byfield, a widowed parish priest, brings home a new wife, a publisher who becomes obsessed with the papers of dead poet Francis Youlgreave. Byfield neglects his adolescent daughter Rosemary who is home for the summer from boarding school and finds himself having to face terrifying truths about his past and his future.

Book Three flashes back to the idyllic 1950s when Byfield is happily married to his wife Janet. It is told from her friend Wendy Appleyard's perspective. And, it is this distance that allows you to put together the jigsaw of their lives and to begin to comprehend the seeds of what triggers sociopathic behaviour even among the most innocent.
Posted by Janet at 2:34 PM No comments:

I found my way to this memoir after reading Athill's SOMEWHERE TOWARDS THE END--my newest favourite book to give to friends.

STET is the term used by editors to recorrect corrections, meaning, "let it stand." And, this memoir published by then- octogenarian Athill lets stand for the public record her work life first at the BBC (after halcyon days spent reading at Oxford) and later in publishing with Andre Deutsch and the house that bears his name.

The second half of the book chronicles Athill's relationships with some of her famous literary charges: Mordecai Richler, Brian Moore, Jean Rhys, Alfred Chester, V.S. Naipal and Molly Keane. With each she is fair and discerning, yet almost always loving.
Posted by Janet at 2:28 PM No comments: