THE DEATH OF DONNA WHALEN by Michael Winter (2010)

This filmic book reads like a Hollywood thriller with stock elements including a paid informant, a delusional witness (convinced she could communicate regularly with angels), coerced testimonies, bungling police investigation, and family feuding, but all are shockingly real. There is enough emotional distance provided to stomach the forensic details, yet you are sure to come away from the story feeling moved to outrage or to pity. Most certainly you will wonder where the justice could possibly be for Donna Whalen's family.

Written in Winter's trademark style where you feel as much an eavesdropper as a reader, THE DEATH OF DONNA WHALEN is certainly worth your time.
Posted by Janet at 4:48 PM 1 comment: 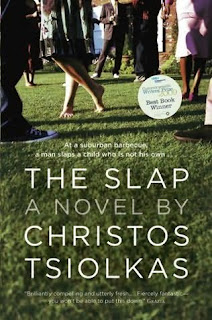 Winner of the 2009 Commonwealth Writers' Prize for Best Book and long-listed for the 2010 Man Booker Prize, THE SLAP is both profound and profane.

At a suburban BBQ in Australia, peopled with relatives and neighbours and long-time friends, a man slaps a misbehaving child who is not his own. That gesture reverberates throughout the multi-voiced narrative that follows. You might think it easy to take sides, but in a web of complex relationships, where each character seems to be protecting secrets from his/her past, morality is complicated, multifaceted and perhaps ultimately ambiguous.

Tsiolkas has written about domestic life in an unflinching portrayal of midlife crises, fragile marriages, and adolescent coming of age.

THE SLAP will haunt you long after you've turned its final page and acknowledge gratefully, like Richie, that "soon, unexpectedly, like the future that had begun to creep up on him, sleep did come."
Posted by Janet at 7:58 PM No comments: 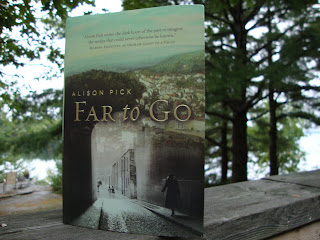 I became a fan of Pick's prose with her first novel THE SWEET EDGE, a he said/she said story reminiscent of Carol Shields' HAPPENSTANCE, so I was curious to see if this new one, recently launched, met my expectations.

FAR TO GO is certainly a more personal book, inspired as it is by the journey of Pick's own grandparents out of Czechoslovakia during WWII, Europe's darkest hour. I was intrigued by the framing techniques used with lists of the Shoah dead and a short passage from an omniscient narrator referring to a train that "will never arrive," one that is both literal and symbolic.

The story proper finds Pavel and Anneliese Bauer, secular affluent Jews, and their young son Pepik and his nanny Marta with their lives upturned by the German occupation. Fearing deportation, they flee to Prague and secure passage for 6 year old Pepik on a Kinderstransport to Scotland where he is temporarily housed with a family that has real troubles of their own. Pavel and Anneliese write positive loving letters to Pepik, though are uncertain that he ever receives them since they never receive a note in return, unlike some of their friends whose own children manage to reassure them that they are being cared for by their surrogate families.

With the tentative thread of a present-day narrator, we learn stitch by stitch, story by story what became of Pepik, his parents and Marta in a way that is harrowing, occasionally hopeful, and always emotionally true.

We are often warned not to judge a book by its cover, but in the case of FAR TO GO, be prepared to do just that. It is even more exquisite between the pages than its gorgeous gem-toned cover art suggests.
Posted by Janet at 6:44 PM 3 comments: 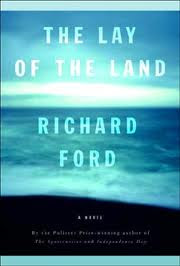 It's been ages since I read Richard Ford (not since WOMEN WITH MEN several years ago), but where have I been? Find a finer chronicler of American mid-life anywhere! Yes, of course, Philip Roth and John Updike, but really, for my money, Ford is the man, waving his Pulitzer Prize from the sidelines.

In realtor Frank Bascombe, Ford has created a character as convincing and familiar as your next door neighbour. Maybe because I've watched friends die from cancer and I am firmly middle-aged myself, I find Frank's candour appealing. He's on his second marriage, has two adult children, and has recently been treated at the Mayo clinic with titanium BBs inserted in his prostate, to treat a disease about which he is not surprised at contracting.

Frank IS his name and unabashedly, unashamedly comments on the New Jersey life so familiar to him. We follow him to funerals, take walks along the beach in stride with him and his lesbian daughter, and worry about getting through the demands of a capital T Thanksgiving with all of the trimmings.

THE LAY OF THE LAND is harrowing, profound and outright hilarious at times. I now know what I've been missing and plan to reach back to the earlier books in the trilogy, THE SPORTSWRITER (1986) and INDEPENDENCE DAY (1995) to marvel again at the words of a writer who continues to hone his craft.
Posted by Janet at 6:43 PM No comments: 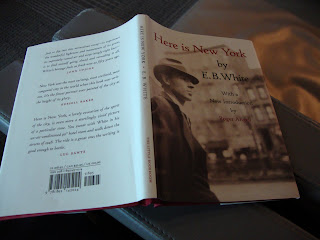 This little gem of a book is an encomium to New York City penned with great affection. White wrote these 60 or so pages as a favour to his stepson Roger Angell, who was then an up-and-coming editor at The New Yorker. He moved back into the city for several weeks, setting up shop at the Algonquin Hotel, that literary hub made infamous by Dorothy Parker. And, like the city itself that summer, he "should have been touched in the head by the August heat and gone off [his] rocker."

HERE IS NEW YORK opens with White's caveat that "on any person who desires such queer prizes, New York will bestow the gift of loneliness and the gift of privacy." Having just visited the city that never sleeps a week ago, I have to say that White's observation continues to ring true.

I loved his time-capsule anecdotes about the St. Patrick's Day Parade that "hits every New Yorker on the head," because "the Irish are a hard race to tune out." And, that the NY Public Library, guarded by those proud sculpted lions near Bryant Park, has a "great rustling oaken silence, with the book elevator (like an old waterwheel) spewing out books onto trays." Or, the "Empire State Building...has been jumped off of by so many unhappy people that pedestrians instinctively quicken step when passing Fifth Avenue and 34th." In parts of the city, "overhead, like banners decorating a cotillion hall, stream the pants and bras from the pulley lines."

White's diction is often poetic and always evocative of the particular time and place he immortalizes. If you are planning a trip to NYC, you really must take HERE IS NEW YORK along for company.
Posted by Janet at 6:27 PM No comments: