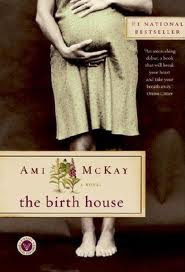 Set during the years of WWI in a small town in Nova Scotia, THE BIRTH HOUSE is the story of Dora Rare, the only daughter born to the Rare clan, in several generations. Dora, an unusual child, is drawn to Miss Marie Babineau, an outspoken Acadian midwife with a gift for healing.

When modern medicine arrives at Scots Bay in the form of Dr. Gilbert Thomas, an obstetrician who promises painfree childbirth to the young mothers, the community begins to question Miss B's methods. Dora inherits the legacy of midwifery and finds herself frequently ostracized, so much so that she has to disappear. She travels to Boston where she stays with one of her brothers and his pro-suffragette girlfriend Maxine.

In addition to Dora's personal journey, you learn about the Halifax Explosion and the influenza epidemic.

I couldn't put this book down.
Posted by Janet at 9:12 AM No comments:

Hosseini continues to explore the troubled territory of Afghanistan throughout the past 30 years from the Russian occupation through the Taliban and post-Taliban rule in this second novel that follows on the heels of his international bestseller THE KITE RUNNER.

In A THOUSAND SPLENDID SUNS, every page resonates with loss: loss experienced and loss anticipated. We begin to understand the violence and the struggle to survive in a war-torn country through the stories of generations that focus on the lives of co-wives Mariam and Laila, both victims of circumstance. Mariam is culturally ostracized because she was born a bastard to her wealthy and influential father Jalil who, although he keeps several wives, refuses to marry Mariam's mother, his mistress.

Laila, is a 14-year-old neighbour to the adult Mariam in Kabul who is pulled from the rubble of a neighborhood bombing by Mariam's much older husband Rasheed. Rasheed decides to take Laila on as his second wife because Mariam has been unable to carry any pregnancy to term and he is shamed by not having any children. Laila's life with Rasheed is rife with abuse, both verbal and physical. In fact, the visceral way in which Hosseini writes those repeated scenes of domestic abuse, witnessed by small children, is extremely upsetting. And, that is entirely the point. No one is safe--not even at home.

At the height of the Afghani refugee exodus, more than 8 million were living outside of Afghanistan. Hosseini, himself born in Kabul, emigrated to the US in 1980. In 2006, he was appointed UN Special Envoy to the UN Refugee Agency. He writes that today over 2 million Afghanis who were forced out of their homes continue to live in Pakistan. If you want to learn more about their plight, visit www.UNrefugees.org
Posted by Janet at 8:06 PM No comments:

With more than 50 published books of poetry, fiction, short fiction and essays to his name, John Updike is certainly one of America's best known contemporary men of letters.

TERRORIST, his most recent novel, is the story of high school senior Ahmad Molloy, who is disenchanted with the hedonistic and materialistic pursuit of his peers in the New Jersey town he calls home. Abandoned by his Egyptian father when he was a toddler, Ahmad was raised by his lapsed Catholic Irish mother whose Bohemian ways are an embarrassment to him. He turns to the words of the Holy Qur'an for comfort and guidance and devotes himself fervently to Allah and to the ministrations of a proselytizing imam at his local mosque.

Ahmad's narrative is balanced by the story of his middle-aged guidance counsellor Jack Levy whose sister-in-law Hermione works for the Department of Homeland Security. In surprising and satisfying ways Updike weaves the parallel storylines together to an unexpected conclusion in Ahmad's post-9/11 world.
Posted by Janet at 7:41 PM No comments:

BREAK NO BONES by Kathy Reichs

Crime novelist Kathy Reichs is a certified forensic anthropologist, like her fictional creation Dr. Temperance Brennan. Having also read CROSS BONES and found the plot fast-paced and the characters credible, I was eager to try another.

In BREAK NO BONES, Dr. Brennan finds herself teaching an on-site course in an archeology field school in Charleston, South Carolina. Among the ancient remains in a Native American burial ground, one of Brennan's students unearths a fresh skeleton. Within days, several other more recent corpses are discovered and Brennan remains in Charleston to work for the coroner's department.

There is a bizarre pattern among the homicides and the clues found in the cervical bones lead to an alarming discovery at a local street clinic where it appears that the marginalized clientele of the extreme poor are being used for nefarious and profitable means.

Written with a social conscience in addition to mastery of the genre, BREAK NO BONES has me reaching for every other title penned by Reichs.
Posted by Janet at 8:05 AM No comments:

A LIFE IN THE BUSH by Roy Macgregor

MacGregor's memoir about his father Duncan is a full portrait of a man who was an anomaly in his time--a bush-loving ranger, who read everything from Juvenal to Robert Service. Duncan MacGregor was most at home in Algonquin Park in his little cabin, managing the park and communing with the wildlife. Except during the summer months when his children were out of school, Duncan remained apart from his young family.

As an adult, Roy took his father on a roadtrip to the Baseball Hall of Fame in Cooperstown. That story is the most charming of those unfurled in this loving tribute of a book. When they passed a low mountain range en route to the baseball shrine, Duncan asked what he was seeing and then remarked, "so that's what a mountain looks like." Until that journey, the only travelling Duncan had done was through his imagination.
Posted by Janet at 7:57 AM No comments: 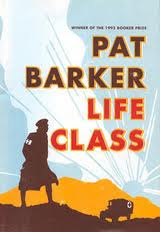 Best known for her REGENERATION trilogy of novels set during WWI, Pat Barker returns to the early years of the war with her most recent book. It's 1914 London and there is a burgeoning class of talented painters at the famed Slade School, under the tutelage of Henry Tonks, a former surgeon who runs the life-drawing studio. There Elinor Brooke and Paul Tarrant meet.

When Paul decides to volunteer for the Belgian Red Cross, his life is more than a world away from his days in art school. Though, on the front near Ypres, where he treats the maimed, dressing their wounds and amputated stumps, he does the best work of his life.

LIFE CLASS raises interesting and disturbing questions about the wounds of war and how they have been represented in visual art--or more often, hidden.

In 1916, the real Dr. Henry Tonks worked with Dr. Harold Gillies, a surgeon then pioneering techniques of plastic surgery on the faces of mutilated young men. Tonks made drawings of the patients before, during and after surgery and those drawings were not exhibited in his lifetime, eventhough they are among some of the most moving images to come out of any war.
Posted by Janet at 9:39 PM No comments:

THE UNCOMMON READER by Alan Bennett (2007) 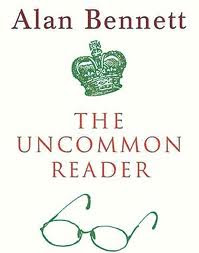 If you only have time to read one little book, this is the one to pick up. The Tony-award-winning playwright of THE HISTORY BOYS has imagined a reading life for Her Majesty Queen Elizabeth II. And, it is a delightful romp.

When the rambunctious corgis take exception to a strange vehicle parked on the palace grounds, the Queen finds herself apologizing to the librarian/driver about their over-enthusiastic behaviour. Because manners matter above all else, Her Majesty decides she cannot leave the little library on wheels without making a selection. So begins Bennett's delightful odyssey into a discourse on literature and why we all must read.

Soon, the previously duty-bound Queen finds herself making excuses, or playing sick in order to finish the current book under her nascent critical eye: from Alice Munro to Marcel Proust to Samuel Beckett. Her equerries are outraged and conspire to put a stop to her foolish reading. However, the Queen has a trump card solution to their high stakes game, which she plays at a High Tea for her Privy Councillors in celebration of her 80th birthday.

For its whimsy and intelligence, you can't match THE UNCOMMON READER.
Posted by Janet at 9:20 AM No comments:

I loved Alice Sebold's bold and unconventional breakout novel THE LOVELY BONES, told from the perspective of a murdered child, so was keen to read this new one. THE ALMOST MOON examines the strained rapport between mother and daughter Claire and Helen Knightly and opens with a shocking scene.

Sebold is unafraid to push the envelope and to challenge taboos, and if you are remotely prudish, this novel is not for you. And yet. Sebold is a sophisticated storyteller and able to write about the darkness and complexity of human relationships better than just about anyone else in the fiction game.
Posted by Janet at 11:35 PM No comments:

Dave Robicheaux is a detective in Louisiana who is blindsided by the arrival of a casino hussler named Trish Klein, because he witnessed, and might have prevented, her father's murder over twenty years previous, had he not been completely drunk at the time. A fellow Vietnam Vet, Dallas Klein was killed in cold blood for gambling debts.

Nurtured by his second wife Molly ( a former nun), Robicheaux finds himself in the thrall of trying to solve the apparent suicide of a young black woman who fell in with the wrong frat crowd at university.

I especially like Burke's earthy diction and distinctly southern way.
Posted by Janet at 11:28 PM No comments: