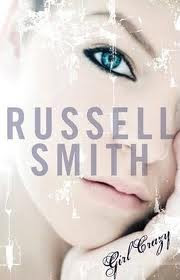 In his trademark elegant prose, Smith tells the story of Justin, a dissatisfied community college instructor, who happens to find himself in the role of Good Samaritan to a sexy young woman who seems to be hemorrhaging in a Toronto park. Justin insists on accompanying Jenna by ambulance to hospital where he knows his friend Andrew is working as an emergency room physician.

Jenna is unlike any of the other women Justin has dated and it is her heady mix of sexuality and danger that both thrills and terrifies him as he tries to build a lasting relationship with her. Soon Justin realizes that his obsessive desire to be with Jenna may destroy him as he is sucked into a world of gambling and drugs in order to protect her.

The ambiguity of the title suggesting both that Justin is crazy about women (which indeed he is) and that the girl herself might be crazy (as could easily be demonstrated by Jenna's inability to really connect with other people) is perfect.

If you are a fan of 19th century storytelling tradition, but also like to read about authentic and hot sex, this just might be THE book for you out of all of the new fiction titles in 2010.
Posted by Janet at 12:59 PM No comments:

This thriller was in a stack passed along by my friend Pat who reads voraciously and widely. I picked it up last night and flipped through in one sitting--with only a break 300 pages in to walk my lab.

A PERFECT EVIL opens with a death row admission of a convicted killer who before receiving last rites tells the elderly priest that he only killed one of the boys, not the three everyone else has believed. Yes, he is capable of atrocity, but so is somebody else who will not be executed that night. Father Francis, the priest, knows this to be true because earlier in the week, the real killer of the other two boys confessed to him those very crimes in every lurid detail.

The citizens of a small town in Nebraska are paralyzed by another recent copycat murder of a little boy, whose remains are found by the river with terrifying wounds. Sheriff Nick Morelli is in charge of the crime scene, but he is soon joined by psychiatric criminal profiler Maggie O'Dell who is on loan from the FBI. O'Dell quickly figures out that this killer will strike again and soon. He does again and again. When the pattern becomes personal and Morelli's only nephew goes missing, the stakes are raised.

Kava's narrative travels along at breakneck speed with just enough red herrings to have you doubt your instincts and although she and Morelli do determine the identity of the perfectly evil serial killer they do not do so before he is able to disappear again, this time to serve as a missionary in Chile where the children mispronounce his name as Father Killer.
Posted by Janet at 12:39 PM No comments:

In the early 19th century, 40 years before Darwin published Origin of Species, a young woman named Mary Anning discovered important fossilized remains in Lyme Regis. She began collecting "curiosities" as a child, following her father along the water's edge, and sold them to seaside tourists in order to help feed her siblings. Because she was a woman and a poor one at that, male paleontologists took credit for her work and exhibited her finds under their names.

Henry de la Beche, a gentleman son to parents who own a slave-run plantation in Jamaica, becomes one of the members of the established scientific community to take advantage of Mary, though not before he admires her passion for fossils and their origin and finds himself falling in love with her. Because of class differences, Henry and Mary cannot possibly end up together, yet both dream of doing so.

Considered a pariah for believing that the fossilized creatures discovered in Lyme Regis predate Noah and the Flood, Mary is unsurprisingly ostracized by the community that raised her.
Posted by Janet at 9:31 AM No comments:

Because I read this Norwegian thriller at the gym over a few weeks, the narrative felt fragmented. THE REDBREAST begins with the 1999 U.S. State visit of then-president Bill Clinton , who is never referred to by name, but rather as someone with a multiple personality disorder: "a psychologist thought his normal personality was not aware that the other one, the sex beast, was having relations with all these women."

Harry Hole, part of Oslo's murder squad, has been assigned to the presidential visit. When Hole makes an embarrassing error, he is reassigned to mundane surveillance tasks, including monitoring the local neo-Nazi activities. That work draws him into a mysterious past when members of Norway's government willingly collaborated with Nazi Germany.

I felt that there were too many narrative threads at times (trying to be a little too clever at implying connections with 1943 and 1999) and with the recurring idea of multiple personality disorder, all the more confusing and that confusion did not add to the tension. There are also predictable romances at the heart; however, I will still pick up another Nesbo novel in order to give the intriguing Harry Hole another chance.
Posted by Janet at 9:31 AM No comments:

Trained as a criminal defense attorney, but now writing novels full-time Denise Mina provides authentic detail of prison life in each of her books where the Scottish landscape is also a character.

In SANCTUM, stay-at-home Dad Lachlan Harriot is shocked when his wife Susie, a respected forensic psychiatrist, is convicted of the murder of serial killer Andrew Gow, one of her former patients. Lachlan is sure of his wife's innocence and is determined to do his own sleuthing through her personal papers and computer files in order to prove so and find grounds for an appeal. However, Lachlan's quest for the capital T truth raises more questions than it answers.

With more twists than the last 15 minutes of Casablanca, SANCTUM messes with your expectations and establishes Denise Mina as a fearless storyteller in the crime fiction genre.
Posted by Janet at 7:50 AM No comments:

IF NOBODY SPEAKS OF REMARKABLE THINGS by Jon McGregor (2002)

In this startling first novel it's a quiet Sunday afternoon at the end of summer and several ordinary citizens are going about their ordinary daily lives. A young man is taking photographs, a young woman two doors down is packing up her belongings to move home, another neighbour is painting his house and a some siblings are playing cricket.

I loved the clever narrative structure and the way McGregor was able to withhold the details of the tragedy the unites all of the characters until the last twenty pages.

The story made me question how I am complicit in my own life in not addressing out loud the remarkable things. And, how much is lost to that silence.
Posted by Janet at 10:16 AM No comments: 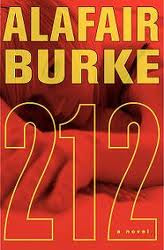 In this third NYPD Detective Ellie Hatcher novel, Megan Gunther, a sophomore, finds herself the target of threats on a campus website dedicated to gossip. Someone knows her daily routine in unsettling detail, but even when she goes to the police, they tell her there's nothing they can do until there is an actual physical threat made.

When Megan is brutally murdered in her own apartment and her roommate is hospitalized as well, Detective Ellie Hatcher and her straight-talking partner J.J. Rogan take the case. They soon discover a connection between Megan's murder and another one involving a real estate agent who had been living a dangerous double life. The stakes are raised when Megan's surviving roommate disappears and Det. Hatcher realizes that she must be found before yet another young woman dies.

With twists and turns and compassion doled out in equal measure, 212 is a satisfying read that has me eager for Burke to pen the next in this intelligent and topical series set in contemporary New York City.
Posted by Janet at 10:16 AM No comments: 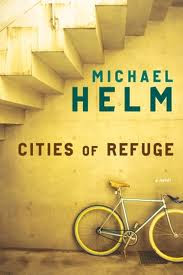 This third novel by Michael Helm is his best to date and the two previous ones made it to the short list of the top fiction prize in Canada, the Scotiabank Giller. I expect no less of this one, except I dare to hope that it be selected the 2010 winner.

In CITIES OF REFUGE subtle Russian nesting doll narratives and meditations on loss and violence set it apart from other literary novels, though paradoxically Helm's stylistic restraint is reminiscent of Coetzee's. If you've read the Nobel Laureate's DISGRACE, you'll know what I mean.

In spare and haunting prose, Helm both unravels and weaves the stories of 28-year-old Kim and her estranged father Harold, an historian of Latin America. Both Kim and Harold have come face-to-face with blind violence and it is that untenable bond that cleaves them.

CITIES OF REFUGE is also a novel about illegal immigrants and the people who try to help them find new lives when there may be absolutely no reason to hope. And, it is a love letter to Toronto neighborhoods, to a dying mother and to those with the power to save or condemn. Expect to be challenged morally and intellectually by this worthy and moving book.
Posted by Janet at 1:47 PM No comments:

HEART AND SOUL by Maeve Binchy 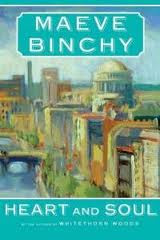 Fans of Binchy's novels will feel the Dublin familiarity of the posh neighborhood restaurant Quentin's in this most recent tale about a middle-aged cardiologist who is raising her 20-something daughters by herself while her estranged husband begins a second family with his twenty-something girlfriend.

Many of the relationships are cliche and the almost-tragedies predictable as the folks with the hearts of gold face obstacle after obstacle before realizing that not all nice guys and dolls finish last. There is class tension thrown in for good measure to show that the Anglo-Irish aristocracy really isn't consigned to the past. New prejudices form with the influx of cheap labour from Eastern Europe and a priest who is being stalked by a sociopathic parishioner.

Binchy's compassion rings true nonetheless and she manages to show that even the most unlovable among us are worthy of love.
Posted by Janet at 1:46 PM No comments: 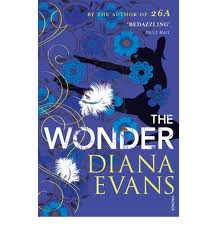 I absolutely loved Diana Evans' breakout novel 26A (winner of the Orange Award for New Writers) and this sophomore effort is equally as engaging.

THE WONDER follows adult siblings/orphans Lucas and Denise who share life aboard a boat moored on the Thames, the same narrow skiff on which they were raised by their eccentric mother. Denise is the responsible older sibling who runs her own floral business while her younger brother Lucas is mostly adrift, though he occasionally writes bit pieces for a magazine.

Trying to figure out who he is and where he's come from, Lucas plumbs the depths of his father's past and discovers that he was at one time an extraordinary dancer/choreographer who steered the once-respected Midnight Ballet, a modern dance company of mainly Black dancers in England in the 1960s.

Meeting one of the lead dancers as well as a dance critic who knew his father intimately, Lucas manages to unravel truths that help him forge his own identity.

Because Evans was a dancer before she became a writer and a critic, this novel hums with authentic dance-world detail.
Posted by Janet at 1:46 PM No comments: