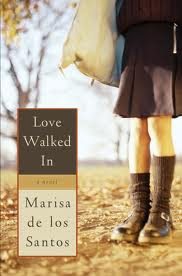 When Martin Grace walks into the hip Philadelphia coffee shop that Cornelia Brown manages, her life alters. This new-found Cary-Grant-look-alike love is the harbinger of greater changes to come. Across town, eleven-year-old Clare Hobbs is abandoned by her mentally ill mother and decides to go looking for her lost father. Clare and Cornelia's paths cross and the two form an unlikely and improbable friendship. De Los Santos invokes the power of classic films to illuminate the mystery and wonder of love in all its permutations.
Posted by Janet at 9:58 AM No comments:

There are several black books that give this gripping Rebus tale its title. When a close colleague is brutally attacked, Detective Rebus is drawn into a cold case that involves a hotel fire, the privileged playboy son of a banker, an unidentified corpse and a long forgotten night of terror and murder. HIs nemesis Ger Cafferty figures slyly. Rebus has to try to decode the secrets in his colleague's notebook to piece together a jigsaw of clues that no-one wants completed.
Posted by Janet at 9:53 AM No comments:

I read a review of this memoir in the Sunday New York Times and decided to pick it up. I admire Homes's short fiction, with its spare prose and directness, so thought at least stylistically I would like her memoir. Her birth mother contacts her through a lawyer and the eventual reunion is fraught with neediness. When her birth father decides to get in the game as well, Homes finds herself agreeing to a paternity test which determines that they are a 99.9% match. Though, she knew he was her blood relative with one glimpse of his ass. Her ass. The power of genetic determination.

When Homes finally unpacks the boxes of her birth mother's life, your heart will crack just a little. Throughout, Homes reassures that her real parents are the people who raised her in a loving home. And, it is her mother who telephones to tell her that her mother died, not the lawyer.
Posted by Janet at 9:47 AM No comments:

Set in Venice and its environs, DEATH AND JUDGMENT is another of Leon's Commissario Brunetti crime novels. A truck crashes on a treacherous bend in the mountains of Northern Italy, spilling a surprising cargo of young sex trade workers being smuggled. A few days later a prominent international lawyer is found dead aboard an intercity train at Santa Lucia. Commissario Brunetti wonders if the two tragedies could be related.

His quest for truth leads him to a seedy Venetian bar and a crime network that stretches beyond the lagoon. It will take at least another gruesome death before Brunnetti and his colleagues begin to understand what is really going on.

Pick up Donna Leon's books. She will keep you flipping pages in earnest.
Posted by Janet at 9:04 AM No comments:

SERENDIPTY ROAD chronicles DeVrye’s personal journey. Abandoned as a baby, she was adopted by loving parents in Calgary. When DeVrye was 21, her parents died of cancer within a year of each other.

When DeVrye packed her bags and arrived jobless in Australia, she began to find her place—but not before she waited tables, taught phys. ed., worked on a mine site and became a public servant. Later she joined IBM where she was posted in Tokyo, Hong Kong and New York.

Named Australian Executive Woman of the Year, Catherine found herself dining with princes, prime ministers and Olympic athletes. In her down time she cycled over the Andes, dived with sharks and climbed Kilimanjaro.

When DeVrye decided to search for her biological parents, her adventures really began.
Posted by Janet at 9:03 AM No comments:

COME AWAY suggests startling truths about the genesis of the Bible, our Western concept of God and of love itself.
Posted by Janet at 9:02 AM No comments:

BETWEEN TRAINS by Barry Callaghan (2007)