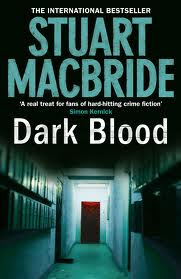 When I heard Stuart MacBride on stage at an IFOA evening that featured his fellow Scottish crime fiction writers Denise Mina and Ian Rankin, I knew I'd find my way to his novels.

At the outset, serial rapist Richard Knox (who fancied grandfather types) is being released, having served his time. And, it looks like now that he's found God he's deserving of a second chance to build a life anew. D.I. Steel is not so sure. She knows Knox "is an odious wee shite, and if anything goes wrong" in his reacclimatization with civilized society that she'll be "the one carrying the can." McRae is less than thrilled to be assigned to the team responsible for getting Knox settled into his Aberdeen home, or to be working with D.S.I. Danby, the one who put Knox behind bars for a decade. McRae, like his boss, believes that Knox is not a changed man. That he "didn't need an exit strategy" to protect him from the wrath of citizens who discover he's living among them. Rather, "he needed an exit wound. Preferably from a shotgun to the back of the head."

Knox isn't McRae's only headache, however. Edinburgh gangster Malk the Knife wants a slice of the mini-development boom in Aberdeen and local crime lord Hamish Mowat thinks he has McRae in his blackmailing back pocket. McRae tries to resist, but he can't help feeling dirtied by their thuggish rapport.

With subplots that feel entirely human, peopled by McRae's damaged colleagues and his accommodating girlfriend, DARK BLOOD kept me interested on many levels. And, although I'd hoped to witness retributive justice meted out on the entirely loathsome Knox, I do understand why MacBride gave him the ending that he did. Life is messy. It doesn't come with a guarantee for a satisfying conclusion. Plus, Knox is a sociopath, one who could give "a seven-year masterclass in how to get away with murder."

Because of the crafty, clever way MacBride tells a story, I'll be reading my way through all of his books featuring D.S. Logan McRae.
Posted by Janet at 1:31 PM 1 comment: 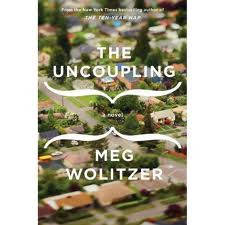 In the Fall during the International Festival of Authors here in Toronto a savvy editor (who works for a different publishing house) recommended Meg Wolitzer's books to me and I finally made my way to her most recent one THE UNCOUPLING during the Christmas holidays.

A social satirist with the aplomb of Richard Ford, Wolitzer enchanted me from her opening sentence: "People like to warn you that by the time you reach the middle of your life, passion will begin to feel like a meal eaten long ago, which you remember with great tenderness." Right? Right.

Enter Fran Heller, a new drama teacher at Eleanor Roosevelt H.S. in small-town New Jersey, a woman with the balls to select LYSISTRATA (the Aristophanes comedy in which women stop having sex with men in order to end a war) as the school play. Curiously, a spell seems to be cast over the women in the school, including Dory Lang, a happily married Literature teacher who is abruptly disinterested in sharing a bed with her longtime spouse Robby with whom she previously slept "together frequently, happily, and not just gently, but with the same gruff, fierce purpose as always."

Not only does Wolitzer satirize small town life and the politics of high school as convincingly as Tom Perrotta did in ELECTION, but she also shines the light on the inarticulate, hormonal messiness of adolescence through the actions of Dory and Robby's daughter Willa and Fran's son Eli, "their mouths having not yet opened onto the hot surprise of other mouths, their bodies still unfolded and unrevealed."

When Marissa Clayborn, the talented, gorgeous lead in LYSISTRATA literally takes to her bed in public protest, Fran Heller casts smart, shy chorus member Willa in her place, a decision that has both intended and unintended consequences.

Like the fictional reviewer of the Eleanor Roosevelt H.S. production of Aristophanes' comedy who praises Willa's "heady and almost breathless" performance as Lysistrata, I suggest that Meg Wolitzer is a novelist "who compels us with her urgency, integrity and beauty" in THE UNCOUPLING.
Posted by Janet at 1:27 PM No comments: 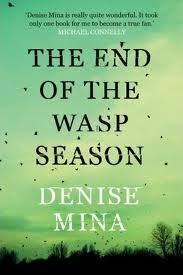 Denise Mina is a whip-smart lawyer-turned-crime-fiction-writer, and one of the finest of the genre. In THE END OF THE WASP SEASON, her eighth novel, millionaire Lars Anderson completes suicide by hanging himself from the oak tree on his sprawling Kent estate. Nobody seems at all upset by his death, including his wife and teenaged children. It's a bit of a relief to them all, truth be told, to be rid of the right bastard, who wrote in his final note to his wife, "I was a great husband. And in return you sucked the fucking life out of me. You fucking wizened bitch. I hope you're happy." And, no, he was not a great husband, as soon becomes clear. Nor was he much of a father to Thomas and Ella or to his secret second family shacked up in London, either.

What is more upsetting, however, is the apparently random murder of a young Glaswegian woman, Sarah Erroll, home to take care of the business following her own mother's death. She is bludgeoned by her young killers on the stairs as she tries to make her escape, wearing only a t-shirt--a source of embarrassment to the investigating officers who find her corpse indelicately sprawled.

DS Alex Morrow, pregnant with twins, and harboring secrets of her own, becomes the lead investigator in this case that points to a former classmate's sons and forces her to contemplate the nature of family and loyalty.

Through intelligent, character-driven twists and turns, Mina's multi-layered narrative reminds me stylistically of Kate Atkinson's CASE HISTORIES or STARTED EARLY, TOOK MY DOG. I hope they'd both be chuffed to be in each other's storytelling company.
Posted by Janet at 1:33 PM 1 comment: 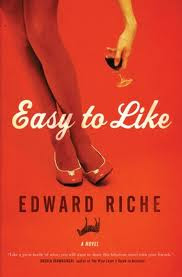 I enjoyed the warp and wit of Riche's first novel RARE BIRDS, so was pleased to receive EASY TO LIKE which promised a satire of a C-list Hollywood screenwriter Elliot Johnson whose true vocation is becoming a beloved vintner, wine snob that he is. However, like Icarus, Elliot swoops too close to the sun (in his case an influential producer whose wife he refuses to bed), and, although not plummeting to his own death off the California coast, is banished to become a tony bureaucrat in, of all places, Toronto, where he is hired to be in charge of English television programming for the mothership, the CBC.

Although I was mildly interested in the vineyard details and the business of running one that produced a wine that is more than "easy to like," I found the satire skewering the national broadcaster mostly mean-spirited.

What began as a vaguely amusing, watery episode of ENTOURAGE with empty-headed, silicon-breasted femmebots who tweak their own nipples (and, no, I'm not making this up) turned into a ridiculous parody of entertainment programming that included a pitch for LES LES starring "Sri Lankan and South Korean dykes." Oh, and don't forget that his ex-wife leaves Elliot for their Hispanic housekeeper, their former child star son is serving time in prison and there's a zebra escaped from San Simeon, nibbling Elliot's best grapes. I haven't even told you about the worst scenes, involving sex "with crooked arthritic claws," the former t.v. host-turned-hermit living in the Rosedale Valley Ravine, or the rich man's fatal ass-over-teakettle fall from the balcony of the Park Hyatt.

Ironically, EASY TO LIKE was not easy to like. Though, with reference to Vaucluse and Chateaunneuf-du-Papes labels, it did remind me of a splendid holiday touring through the wine caves in the south of France. Riche also used two of my favourite words--"chuffed" and "petrichor--" and raised the specter of the Amazing Kreskin. Remember him?
Posted by Janet at 3:33 PM No comments: 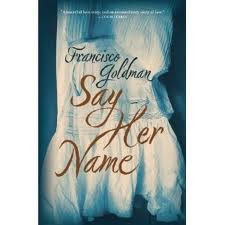 I heard Francisco Goldman interviewed by Eleanor Wachtel during the International Festival of Authors here in Toronto and was impressed by his candor. He not only spoke openly about his vulnerability after the accidental death of his wife Aura two years after they married, but also about how writing this book because of its rawness helped him to face the blame that he continues to shoulder.

Judge this book by its cover as he invited us to do that afternoon. It is a photo of Aura's wedding dress, the same dress that he believed filled with her spirit as it kept him company while he wrote this mesmerizing novel.

What strikes me about SAY HER NAME, and it will you, as well, is how Goldman toys with the form of a memoir, encouraging each reader to reveal their shared experiences together, layer by layer. Like Michael Ondaatje, who similarly plays with the form in his recent and most accessible novel THE CAT'S TABLE, Goldman is winking a little here, dear reader. Yes, there are intimacies that actually occurred between him and his whip-smart, sexy young wife, but he has also used tools of the novelist's trade and imposed a narrative arc that is largely absent from life, to make your experience all the more satisfying.

Read SAY HER NAME, the novel Colm Toibin calls, "a beautiful love story, and an extraordinary story of loss." It is winsomely both.
Posted by Janet at 6:21 PM 3 comments:

Set in France, Martin O'Brien's JACQUOT books are as much clever crime fiction as they are brilliant armchair travel through Paris, Provence and the Cote d'Azur.

At the outset, Chief Inspector Daniel Jacquot is just one of the boys at a reunion bash for his fellow rugby teammates hosted by their billionaire coach Pierre Dombasle at his opulent residence in the South of France. When one of the middle-aged lads appears to have committed suicide in the stables, however, Jacquot switches immediately into investigative mode, not trusting the casual attitude of the local constabulary.

There are soon other suspicious deaths as well: in a sex club, on a curving stretch of road, and in the comfort of a home. The coincidence is too much for Jacquot and he becomes driven to solve each apparently linked crime.

O'Brien knows about pacing. He could teach a master class in it, to be sure. With each whip-smart plot turn and new assumption, he'll have you flipping the pages of JACQUOT & THE FIFTEEN right through to its surprising and satisfying end.
Posted by Janet at 7:58 AM No comments: