THE BURGLAR ON THE PROWL by Lawrence Block (2004) Harper Collins, 294 pages 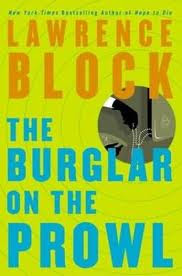 Go ahead. Add Bernie Rhodenbarr, Manhattan Antiquarian bookseller by day and burglar by night, to the pantheon of favourite criminals. He's one of those guys you are willing to forgive their occasional felonies because they are so appealing and only marginally morally questionable.

Block hooked me in THE BURGLAR ON THE PROWL with the opening word nerd exchange between Bernie and his friend Marty Gilmartin:

"Apparently, nouns, anyway. Adjectives seem to be supporting you well enough, but nouns--"

"Help me out, Bernard. Who is more qualified to supply le mot juste? Words, after all, are your métier."

The man in question is Crandall Rountree Mapes, "a worm, a rat...a bounder, a cad... a rotter... a thoroughgoing shitheel," who has just happened to woo Marty's mistress Marisol away from him and into Mapes' perfectly manicured surgical hands. Of course, it's personal. And, of course, Mapes deserves to be taken down a peg or two and Rhodenbarr is just the man for the job that involves cracking into a personal safe hidden behind a painting in Mapes' bedroom, a passable painting of "your basic generic sailing ship." It's a "neat, uncomplicated bit of vengeful larceny that will reap a tidy profit," an offer that Rhodenbarr cannot refuse, especially for a friend.

While waiting to burgle Mapes' upscale abode on a night that he is sure to be out with his wife at Lincoln Center, Rhodenbarr gets restless and to assuage his spilkes he goes out on the prowl, a decision that he begins to regret when it lands him smack dab in the middle of several murders for which he is not responsible, but to which he is irresistibly drawn because of unlikely coincidence. And, Bernie, is never one to let sleeping dogs lie.

With trademark wit, playfulness and respect for the game that successful suspense requires, Block delivers the goods in THE BURGLAR ON THE PROWL. And, isn't it fun that well-mannered Bernie gets the girl, even if it's only for now.
Posted by Janet at 9:54 PM