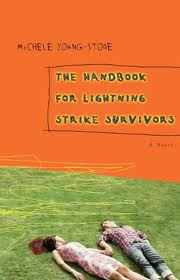 Becca Burke and Buckley Pitank live worlds apart in Chapel Hill, North Carolina and Mont Blanc, Arkansas. Raised in the 60s and 70s on different sides of the country both are drawn together through their common experience of lightning strikes. When Becca was eight she was struck down in her driveway and when Buckley was a young teen he witnessed his mother's death as she was seared by a bolt on a family excursion.

Becca's Mom Mary is a drunk. A beautiful drunk. Her father Rowan is a philandering chemistry professor who looks like Cary Grant. Buckley's Mom Abigail is his best friend and he loves everything about her "from the strawberry bumps on her legs where she dry-shaved with her Gillette to the way her black hair knotted at the nape of her neck." He never met his father.

In parallel narrative arcs we follow Becca and Buckley from their childhoods through adolescence and well into their adult lives. Buckley has an especially challenging time as he deals with his odious grandmother Winter (a character who would be at home among Dickensian villains) and his mother's predatory husband, the Reverend John Whitehouse, whose congregation is dwindling so much that he turns to selling Amway as the way of truth and light. While Becca's parents adore her, she senses her own mother's issues with her father, not only senses but feels viscerally the abuse her mother suffered when she, herself, was growing up.

Buckley may be not only one of the most resilient characters you'll meet in contemporary fiction but also one of the kindest and Becca's pluck and determination to hone her craft as a visual artist will convince you that the creative impulse is a balm. And, when they meet through a mutual friend at a gallery vernissage in New York, you will be as relieved as I was that they come face-to-face with someone who entirely understands who they are and doesn't pass judgment.

THE HANDBOOK FOR LIGHTNING STRIKE SURVIVORS heralds a savvy new voice in American letters. Keep your eyes peeled for the work of Michele Young-Stone.
Posted by Janet at 8:37 AM

I am so glad that you loved and understood Buckley, and I love how you mention the artistic impulse as a balm. Thank you for the glowing review.

I loved this book!

This is a wonderfully written review! My gosh, you've sold me. I'm adding this book to my list right now!