THAT SUMMER IN PARIS by Morley Callaghan (2006) Exile Editions, 217 pages 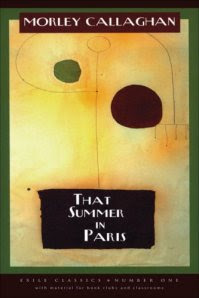 Originally published in 1963, Callaghan's memoir of 1920s Paris was republished in 2006 to celebrate the 40th anniversary of Exile Editions. Callaghan’s memoir of his heady time in 1929 Paris in the select company of Ernest Hemingway, Scott Fitzgerald, James Joyce and Robert McAlmon is a succulent treat for a literary nerd like me who has always considered that particular expat community the most desirable one with which to ingratiate oneself. It is why I have so adored Woody Allen’s recent cinematic confection MIDNIGHT IN PARIS, too—the impossible imagined delight of being party to that particular passionate coterie.

Due to circumstances that are still a little beyond my ken, I was at Morley Callaghan’s 86th birthday fete in Toronto, so it is more-than-a-tad amusing for me to reconcile the gentleman I met that night in 1989 (who, after we sang “For He’s a Jolly Good Fellow,” insisted, from his perch at the top of the stairs, his false teeth clacking about in his mouth, “I have never ever been. A. Jolly. Good. Fellow.”) with the nascent novelist so certain of his own place among the greatest writers of the 20th century.

In the early Twenties, Callaghan and Hemingway met in Toronto while they were both working for the Toronto Daily Star. The Hemingways were in Canada for Hadley to give birth to their son because they had heard the health care was excellent, and Callaghan was trying his hand at journalism before finishing his law degree at U of T. When Hemingway determined that young Morley had tried his hand at fiction, he offered to read his stories in exchange for a look at the proofs of IN OUR TIME which Callaghan referred to as “a series of long paragraphs, little vignettes… so polished they were like epigrams, each so vivid, clean and intense that the scene he was depicting seemed to dance before my eyes.” Hemingway offered Callaghan this gift: “You’re a real writer. You write big-time stuff. All you have to do is keep on writing… Whatever you do, don’t let anyone around here tell you anything.”

When he was only 22, Callaghan had a story (thanks to Hemingway’s kind introduction), “A Girl With Ambition,” published in the 2nd edition of THIS QUARTER in Paris and his fellow contributors included James Joyce, Ezra Pound, Gertrude Stein and Ernest Hemingway, all of their names in bold black on its cover. That became a charm and the confidence boost he needed to keep writing. Soon enough Scribner’s in New York signed Callaghan on for a novel and a collection of stories to be edited by Maxwell Perkins, who also was responsible for Hemingway and Fitzgerald, so his literary pedigree was established early.

Once in Paris that summer of 1929, it feels as though you are the third that walks beside Morley and his wife Loretto along those Left Bank streets, sitting in the cafes or at Les Deux Magots, waiting for Scott or Ernest to poke their heads in and scooch beside you to warn you of the dangers of Pernod. You’ll meet Joyce and his Nora, Sylvia Beach (his great protector and publisher at Shakespeare and Company), Scott and Zelda, Ford Maddox Ford, Robert McAlmon, the painter Miro and other luminaries of the Quartier at that time. And, you will be charmed by them all, even when they are badly behaved and irascible or insecure and easily bruised, egos wounded by reviews or a lucky punch in the boxing ring.

One of the sweetest moments for me was when Fitzgerald offered Callaghan his wallet, insisting, “Here, Morley, keep this wallet. I’d like you to have something of mine.” Callaghan accepts: “All right. Write your name in it then.” But neither one of them had a pen. So, Fitzgerald (then struggling his way through the manuscript of TENDER IS THE NIGHT), “put the wallet against a lamppost, and taking out his knife he scratched his name on the leather.”

What a keepsake from “those dreams” Callaghan had of Paris as “the lighted place” where he got to know “Hemingway in his prime…perhaps the nicest man I had ever met.” And, he could “say the same for Fitzgerald.”

Having spent that long ago evening in Callaghan’s company, I feel a little closer to them all after reading THAT SUMMER IN PARIS.
Posted by Janet at 2:04 PM

This sounds divine and is going to the top of my list (well close to the top anyway)! Love the cover as well-a Miro? Beautiful.