THE DISCIPLE OF LAS VEGAS by Ian Hamilton (2011) House of Anansi Press, 340 pages 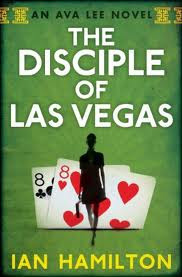 Feisty, sexy forensic accountant Ava Lee is back in the second of this entertaining series published by the Spiderline imprint at House of Anansi Press. If you missed her debut in The Water Rat of Wanchai, really you ought to get caught up. Ava is a creature of habit, working through her enigmatic assignments often clad in a black Giordano t-shirt and Adidas sweatpants, sipping on mug after mug of Starbucks VIA instant coffee, tossing a Chanel bag over her shoulder and slipping a Cartier tank watch on her wrist as she scribbles relevant details and provocative questions in a fresh Moleskin notebook.

Ava’s business partnership with a septugenarian of no relation whom she calls Uncle is a fruitful one and they frequently work for a million dollar retainer. Their clients are “typically Asian, normally desperate, and often irrational by the time they signed up with Ava and Uncle” who unabashedly take “thirty percent of everything they recovered.” This time they are hired by Tommy Ordonez, the richest man in the Phillipines (and a bully), to recover $50 million lost in a land swindle.

Ava’s research takes her to San Francisco, Vancouver, Victoria, bank accounts in Costa Rica and Cyprus and to an online gambling ring in Las Vegas that happens to be run through a First Nations server, hosted by the Cooper Island Gaming Commission and managed by the honourable Chief Ronald Francis. Thanks to her instinct and ability to ask the right questions, Ava uncovers links to infamous gambler David “the Disciple” Douglas and his business partner Jeremy Ashton, both of whom she comes to believe have cheated the online system and have hidden her client’s stolen funds.

Before Ava is able to get to the end of the money trail, she’s beaten up in a Vegas parking garage, has the psychological weight of an attempted suicide on her shoulders, and is forced to call in Uncle’s 150-pound thugs and likely sociopaths Carlos and Andy (who only speak Cantonese) to help persuade Douglas and Ashton why they ought to come clean (using a gun, a meat cleaver and stove top elements.) However, more than their reputations are at stake and what may have been a simple game of cat-and-mouse turns out to be something with high political stakes that risks a diplomatic disaster in the British Prime Minister’s Office.

Always fair-minded and never too proud to appeal to St. Jude (the patron saint of lost causes), or to use her terrifyingly precise bak mei martial arts skills, or to compromise for the sake of succeeding on her client’s behalf, Ava strategically negotiates her way through to a satisfying conclusion.

The best news, however, is that the next book in this exciting and entertaining series is already scheduled for February 2012. You can be sure that I will be eager to trail Ava Lee on her next adventure then in The Wild Beasts of Wuhan.
Posted by Janet at 7:24 PM