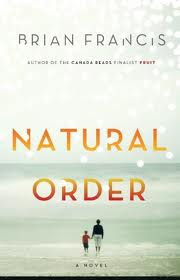 At a launch for another author’s book earlier this year, I chatted with Brian Francis’s editor who gushed about this forthcoming novel. So, I asked her to send me an ARC once it was available. Hearing a little about its plot and themes, it sounded to me as though it would be a novel along the lines of Stewart O’Nan’s most recent triumph EMILY, ALONE--a book I adored.

NATURAL ORDER opens with an obituary for John Charles Sparks dated July 27, 1984. He was only thirty-one when he died, allegedly of cancer. And, although John’s story is at the heart of the narrative, it is told many years later through the eyes of his mother, Joyce, now an 86-year-old widow living out her remaining days in a nursing home where the buzzers keep her awake at night and she laments the problem of getting old as “time bends and shifts. Memories spring up, uprooted.”

Joyce is spunky and has a dark sense of humour, one of her pieces of emotional armour. When her snoring roommate irritates her, she dreams of hurling the Yellow Pages at her, “never at her head, though I’ve been tempted. Only at her feet.” And, when she is exasperated by one of the many health care aides, she muses, “I could have told her I was pregnant and she would have asked me if I wanted ice in my glass.” One day, a new volunteer, Timothy, drops by for a chat and Joyce is startled by his hands that remind her of her son John’s: “They’re nice. Strong… I feel my heart fold up like a piece of paper.”

Over the course of seven decades, Francis has Joyce unfurl her tale, from the summer she was seventeen and working in the local ice-cream bar with her musical-loving, tap-dancing friend Freddy Pender (who channels Robert Preston as Harold Hill in The Music Man) to her early married years raising her son John to the devastating years after his unexpected death to her widowhood when she “didn’t want to face life without [her] son and husband” to her final days spent in the company of strangers where she finally finds redemption.

In Joyce Sparks, Brian Francis has created an authentic and memorable voice of a woman who has spent her lifetime wrestling secrets to the ground, and who finally comes to terms with the healing power of facing the truth and making amends before it’s too late. What impressed me most about this book was Francis’s keen, clear understanding of a parent’s grief at the loss of a child, where, as for Joyce and her husband Charlie, “things either happened before or after John’s death. The world was cleaved in two.” It is not the natural order to bury your child. He is meant to bury you.

By balancing Joyce’s complicated grief journey with the realities of aging, Francis offers up lessons for all time. I hope very much to see NATURAL ORDER on the important fiction long lists this Fall. It deserves to be there.
Posted by Janet at 11:37 AM

This sounds like a must read ... thanks so much for bringing it to my attention!

You may not realize that an online accelerated degrees are the quickest and easiest path to a new future. There are some fast track programs now available at online universities that give you the opportunity to get that college degree in 24 months. For further information visit this site for the details.