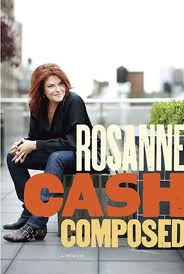 As a beloved songwriter and previously published author of a children's book Penelope Jane: A Fairy's Tale and the adult short fiction collection Bodies of Water there's no doubt that Rosanne Cash is an accomplished writer. With this memoir Composed, her most intimate book, Cash mines her life's work so far and reflects on the paths that have led her to where she is today as a mother, a musician, a wife, a sister, a daughter and a friend.

The great strength of this book is the frankness with which Cash expresses herself, a daring boldness that never borders on arrogance or entitlement, though at times she was certainly spoiled as the daughter of an American icon who was happy to take care of her and her siblings both financially and emotionally. It's heartening to discover that her father especially savoured their company in his challenging final years, when even the idea of family meant so much to him.

As an eldest child myself I could relate to the young Rosanne's innate sense of responsibility for her younger siblings, especially when they lived in the desert north of L.A. in Casita Springs where rattlers where commonplace and she "developed a near-psychotic fear of snakes that resonates to this day" after watching her mother chop off their heads with a garden hoe and "hurl their writhing bodies like a javelin onto the fence."

Throughout COMPOSED I felt as though I were being invited to bear intimate witness to Rosanne's life in all its joys and sorrows--and there are plenty of both. What impressed me, though, was the genuineness with which she approached each moment with gratitude and oftentimes infused it with her permeating dark humour. COMPOSED is an eloquent testimony to a life well lived and an acknowledgement that the best may be yet to come.
Posted by Janet at 10:11 PM