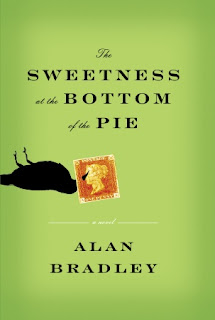 11 year-old Flavia de Luce is a precocious and intelligent heroine in the tradition of Jane Austen's Emma and Harper Lee's Scout Finch. She's certainly a know-it-all with more than her fair share of curiosity about other people's business.

Set in 1950, primarily in and around Flavia's sprawling family home in England called Buckshaw, SWEETNESS AT THE BOTTOM OF THE PIE follows the pre-adolescent devoted chemist and amateur poisoner (she does have two older irritating and narcissistic sisters, afterall: Ophelia aka Feely and Daphne aka Daffy) as she tries to solve the mystery involving two corpses on the grounds.

The first is a bird with its spike-of-a-beak impaling a postage stamp and the second is a stranger who expires as Flavia finds him in among the cucumber patch, but not before he mysteriously utters "Vale."

What follows is a terrific romp where we learn about her father, the Colonel's, adolescent past from other local townsfolk and where through Flavia's wit and common sense the mysteries are solved right to the satisfying end when Flavia receives a remarkable handwritten letter of thanks from His Majesty (George VI) himself.

It is no wonder that Bradley was awarded the Debut Dagger Award for this first in a series featuring the intrepid Flavia.
Posted by Janet at 1:59 PM