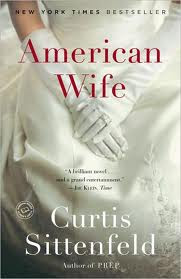 Alice Blackwell is the First Lady of the United States when her husband Charlie occupies the commander-in-chief's seat from 2000-2008. In this novel, loosely based on the life of former First Lady Laura Bush, Sittenfield explores how an ordinary happy childhood in the midwest, transformed by adolescent grief and followed by stable adulthood can have the surprising trajectory that lands in the Oval Office.

Alice Lindgren Blackwell is a sympathetic character from the outset when she is a bookish only child, raised by adoring parents and an eccentric grandmother who has a longterm lesbian romance with a medical doctor in Chicago. One night when she is seventeen changes Alice forever as she realizes the fragility of life.

When she is wooed frenetically more than a decade later by the charismatic and playful Charles Blackwell, Alice cannot quite believe her good fortune, until that is tempered by meeting Charlie's controlling mother, nicknamed "Maj" by all of her sons (short for Her Majesty), who imposes her will and apparently racist attitudes more often than not.

The privilege into which Alice marries means she no longer works as a children's librarian, yet her story continues to be infused with the great children's books of the 20th century: A Tree Grows in Brooklyn, The Giving Tree, Mike Mulligan and His Steamshovel, and on and on...all books I remember either reading or having read to me by my grade school librarian, Mrs. Malcolm--the coolest teacher in the school because she drove a yellow corvette.

Sittenfield knows how to tell a compelling story with interwoven plotlines and she creates a most believable character in Alice Blackwell. Now I'm going to not only pick up her other novels but also look for the biographies of Laura Bush.
Posted by Janet at 8:29 AM