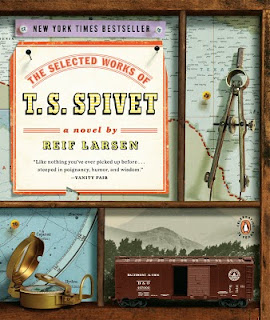 Larsen's epigraph from Melville's MOBY DICK--"It is not down in any map; true places never are."--is a perfect touchstone for this idiosyncratic and totally engaging bildungsroman about an extraordinary boy.

Tecumseh Sparrow Spivet is a twelve-year-old map-making Midwestern wunderkind who is invited by his mecca, the Smithsonian Institution, to deliver an address about his exceptional work. He instinctively knows that "a map does not just chart, it unlocks and formulates meaning; it forms bridges between here and there, between disparate ideas that we did not know were previously connected." Of course, the man who placed the call is unaware that T.S. is only twelve, or that his journey to Washington, D.C. from Divide, Montana is a risky one, the stuff that dreams are made on.

Nothing escapes T.S.'s need to make sense of his world. Not the watershed, nor the topography of his bedroom with his Lewis and Clarke rug, nor the amplitude of the gunshot that killed his younger brother Layton, whose absence is the ongoing presence in the narrative. Layton hides beneath everything T.S. writes. Even the porch speaks to T.S. Not to mention his dog Verywell, or the Cowboy Winnebago he stows away in to make his train-hopping, hobo-like journey from the West to the East.

As you are beguiled by T.S.'s story, you will want to linger over the marginalia--sophisticated doodles, impeccable maps and wonderous ideas--that helps this memorable protagonist find his way to real belonging.

THE SELECTED WORKS OF T.S. SPIVET is the sort of book that makes your heart sing about the wonder of this life. Do yourself a favour. Read it.
Posted by Janet at 4:55 PM